Lactic acid bacteria (LAB) fermentation (F) plays a major part in traditional food processing technology all over the world. LAB produce lactic acid, a gentle tasting acid which can lower the pH of a food making it uninhabitable to other types of microorganisms. LAB F contributes to preservation, flavour and texture of foods. LAB is used to describe species from many genera, most commonly Lactobaccillus, Lactococcus, Leuconostoc and Streptococcus thermophillus. (de Vos, 2005). Certain taxa of LAB are also responsible for the production of bacteriocins, chemicals that inhibit the growth of other bacteria, the example of this par excellence being nisin. Nisin and other LAB produced bacteriocins have been shown to be effective in the prevention of many pathogenic species (Ross 2002).

LAB is the type of F occurring in sauerkraut, yogurt or kefir, cured meats, and idli. It is also responsible for the gentle acidity of the Belgian lambic beers as well as the malolactic wines where harsh malic acids from the grape are converted into softer and more palatable lactic acid. 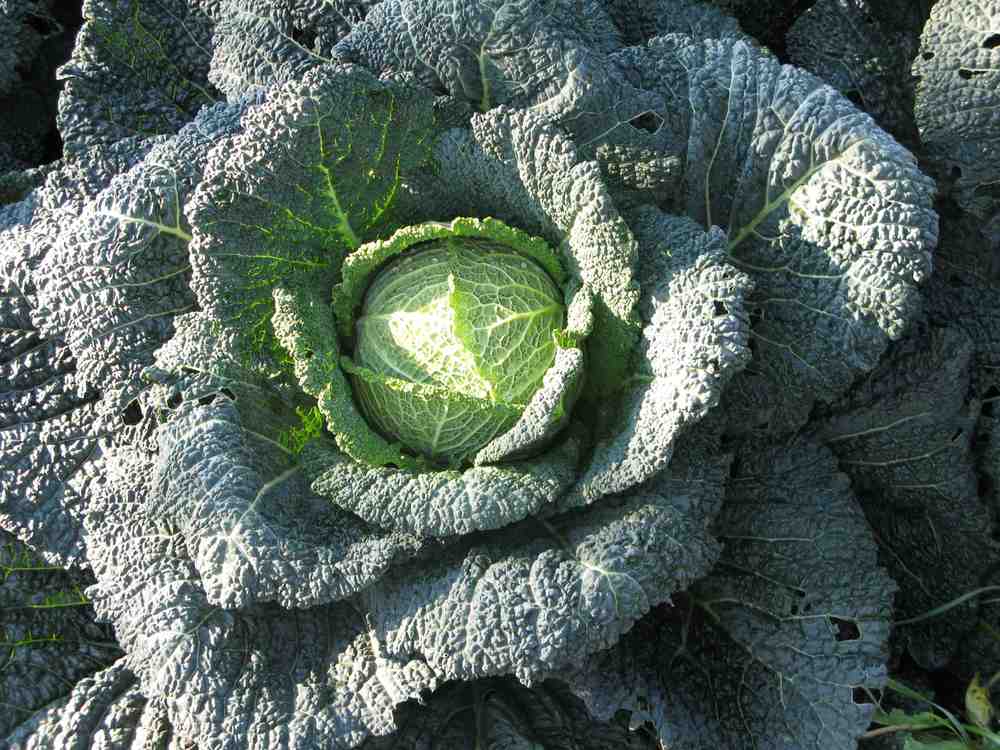 You cant argue with a wonderful cabbage like this – it went on to become sauerkraut.

Importantly LAB are found naturally in dairy products and many species are able to continue life in the presence of salt meaning that salt can be used as a MO selection mechanism as it is in sauerkraut. Many high quality LAB fermentations typically found in a kitchen are made by ‘master artisans’ who work with these cultures on a daily basis. This is particularly clear with cheese and other products of the dairy industry. Scandinavia has long been a homeland for dairying. Although in early times being split into tribal groups, some of whom did, and some of whom did not milk their animals (especially reindeer), it appears that those communities which practiced milking of animals have been more successful, possibly due to their use of this very important food source. Frederik J. Simoons (1973), when tracing lactose tolerance (tolerance resulting from the production of the lactose hydrolyzing enzyme lactase) in populations found significant biological patterns which led the researcher to hypothesise that nomadic tribes in Eurasia and north Africa were among the first to practice dairying. Gary Nabhan (2004) suggests that around 10,000 BP a mutation occurred in the DNA of an isolated tribe of Northern Europeans which allowed them to take advantage of this rich source of nutrition, Nabhan goes on to suggest that within as little as 15 generations, the prevalence of this specific gene mutation could have become wide.

The success of those peoples in the Nordic countries may also be in relation to the increase in Vitamin D, which normally is produced by the human body in the presence of sunlight, but can also be gained from milk. In the Nordic winters, sunlight is very short, and so, any extra Vitamin D can be key in maintaining health. Nordic cultures were much more inclined to drink their milk soured as in the old times it not considered healthy to drink fresh milk.

“I know that in the old times they milked the cow in a jar and then they put the milk in bigger container for fermentation but used a sieve made by hay or fresh grass to get rid of insects and stuff. The grass, I think, would impart LAB into the milk, and of course, also from the cows teat and the human skin” – Patrik Johansson, personal email exchange, 2012

It is said that when the Romans arrived in Northern Europe they were taught to make butter by the Celts, Pliny the Elder commenting that butter was “the most delicate of foods among barbarous nations, and one which distinguishes the wealthy from the multitude at large.” (McGee, 2004) Sweden was the worlds largest butter producer from the middle-ages until 1898, when Demark took over (Johansson) and Denmark has been in the lead ever since. Below Johansson a Swedish master artisan creator of ‘virgin butter’, describes the specific qualities that make the butter key to the dining experience at Noma describes how he learned to make butter and developed the technique into the ‘unwashed’ product, ‘virgin butter’.

“My grandmother had small dairy during the 50s and 60s where she made only butter on a very small scale. She taught me how to make butter. Her method involved the traditional way of washing the butter, that is, removing as much of the buttermilk as possible by washing it with cold clean water. Washed butter has a higher fat content and keeps longer but we discovered that by washing the butter you take away flavour and also the really nice acidity present in the buttermilk (pH 4,5). So rather than focus on the property of keeping longer we focused on the property of taste and how to maximize it. We maximize the butter aroma during the fermentation time, which usually lasts for 48 hours, but also during the churn by churning at a higher temp than what is usually considered normal in the butter industry. During the fermentation period we use a temp curve (the details are secret). The resulting butter has a more buttery taste but also a nice acidity due to more buttermilk present…

… Late one night I churned by hand and added salt before churning and decided to stop just when the first little butter grains formed. Normally I churn until the butter grains are as big as chickpeas and then I remove most of the butter-milk. When the first little butter grains form the separation between the fat and the water (butter milk) is just taking place and the process requires constant monitoring to the second. Virgin butter has a fat content of 40% as opposed to the regular butters fat content of 80 %. In virgin butter all the acidic buttermilk is present and retained I think thanks to the capillary effect. The result is a butter that is spreadable directly from the fridge with a pleasant acidic and buttery taste. It also has a unique grainy texture.” – Patrik Johansson, personal email exchange, 2012

It is important to note that some LAB preparations can be easily made in the restaurant kitchen, giving the chef some ability to manipulate the organoleptic properties by changing variables within the process. For example LAB are also extremely important in bread making, especially when the natural levitation process of using a sourdough are involved. Bread made with natural leavening is much tastier, and this is in part, is due to the high levels of LAB in the mother dough – this will be covered in a later post.

One useful way to inoculate a ferment with LAB (e.g. fish sauce (see previous post titles ‘Umami from Salt rich Fermentation’) or cured meat (future post) is with the addition of whey, thus hastening the process of acidification due to both the presence of lactose and of LAB in the whey. Whey can be collected after making cheese, or by straining yogurt. At NFL adding a little whey proved very useful in a number of experiments. Lactic fermentation of thinly sliced root vegetables (carrot and beetroot) proved useful in making deep fried ‘crisps’, due to the LAB processing of sugars, there was considerably less caramelisation during the high temperature frying to try this, mix thinly sliced carrots with 2% Salt and a bit of whey, leave them weighted and submerged in their own juices until the sweetness has turned to a gentle lactic acidity, then dry ‘em and fry ‘em – yum.

In other dairy products, yogurt and yogurt whey are used a great deal in adding certain flavours and textures to foods. Marinating meat with yogurt has long been practiced by various societies, the recipes for yogurt and a yogurt-marinated leg of lamb is given below. 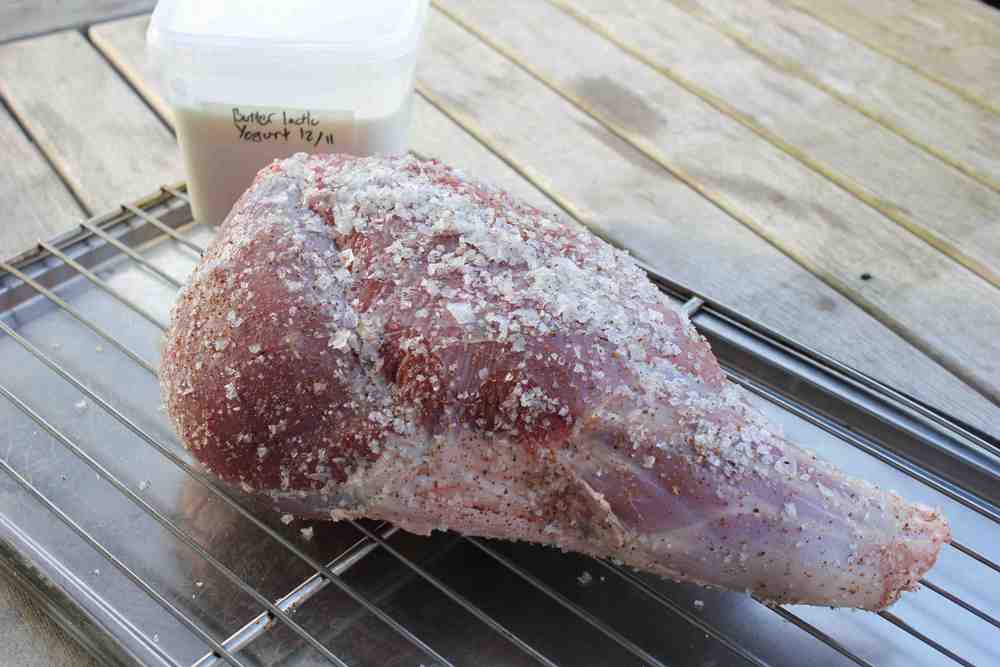 Nabhan, G.P. (2004) Why some like it hot: food genes and cultural diversity Island Press, USA.

McGee, H. (2004) On food and cooking: an encyclopedia of kitchen science, history and culture, Hodder and Stoughton, UK.

Simoons, F.J. (1973) The determinants of dairying and milk use in the old world: ecological, physiological, and cultural, Ecology of Food and Nutrition 2 : 83.