Did our ancestors also think about a better future?

I bet they did.

Take my Swedish ancestors for example.

Not long ago, say 150+ years but even into the 1920’s in some places, women spent a large part of their waking days washing clothes.

They washed them, mended them, sewed them, prepared to wash them, cleaned up after washing them, planned for the next time they had to wash them, and so on. 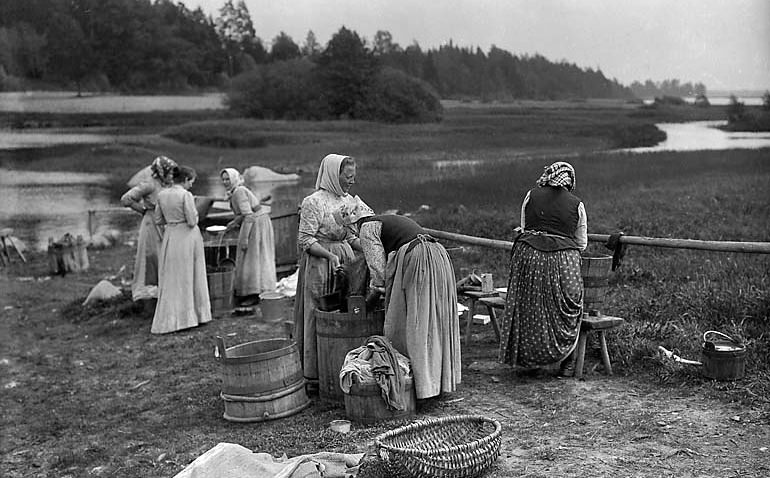 Now in the winter time, sometimes they’d have to take up a hole in the icy lake or a nearby river to wash their clothes.

I’ve read how, in the freezing cold water, they’d wash the clothes until they couldn’t feel their hands.

They called this process of washing clothes to “böka” in the local tongue.

Fast forward to present day, and what do we do now?

I just throw my clothes in the washer, set the right program, press a button and walk away.

Same with washing dishes. I just throw them in the dishwasher and electricity will work for me at pennies on the hour.

It’s all automated and requires no energy input from me, aside from loading them up and emptying them.

My female ancestors must have thought once in a while about a future where they did not have to spend so much of their life energy on washing clothes.

That future is here now.

What do I think about once in a while?

I sure wish I did not have to spend so many of my waking hours working.

Working just to see most of it go to buying mass-produced food at the supermarket, and to paying interest to the bank for my house.

And that’s after I pay the 50% fee to the corrupt and greedy protection racked called government so they don’t throw me in jail.

Working so much that at the end of the day I’m so tired that the only thing I can muster is to sit in front of the TV watching mass produced media.

(In reality I don’t watch TV, but for many people this is the current reality)

But I don’t think we have to live like this. I think there’s a better way.

Imagine an alternative Now where food is growing in abundance.

Where you could go outside anywhere and pick free delicious food off of a tree, or pull something edible and nutritious out of the ground.

An alternative Now where the people of earth has come together planting seeds rather than dropping bombs.

If we did that, amazing things would happen in only one growing season.

In two or three growing seasons we’d have total food abundance from annual crops, and the perennial plants and fruit trees would have gotten off to a good start.

In a decade we’d have total abundance with perennial fruit trees and nut trees everywhere.

In a century we’d have permanent food forests so well established that posterity would never have to worry about how to feed themselves again.

In this alternative Now shelter is cheap and abundant, and you don’t need to take on a mountain of debt just to have roof over your head and a safe place to sleep.

The homes in this alternative Now are beautiful, and the people build their homes out of local, natural materials.

Materials that people have used for thousands of years to build shelter. Without mortgages, and without the threat of foreclosures hanging above everyones heads.

It’s all about systems

Now let’s go back to the example of the washing machine, because I brought it up for a reason.

A washing machine is a system, and just as the washing machine has freed up immense amounts of time – there are other kinds of systems that can do the same thing for us.

Nature is also a system. In fact it’s the most amazing and perfect system that exists on planet Earth. And it’s a system that is being massively under-utilised by the average human being.

Frankly, I think we’re being scammed. We’re being scammed by large corporations that want us to work for them so that we can pay for things that Nature has provided for free for billions of years.

These corporations have hi-jacked Nature. They take the fruits of Nature’s labor, slap on a branded label, and we happily shell out our money for it without thinking about where it came from and how it came into being.

Case in point, I bought some sea-buckthorn berries at the store the other day.

So I could buy 5 packages at the supermarket for a total of 1250 grams of berries, or I could buy and plant a bush in my garden that would provide a harvest for years to come. 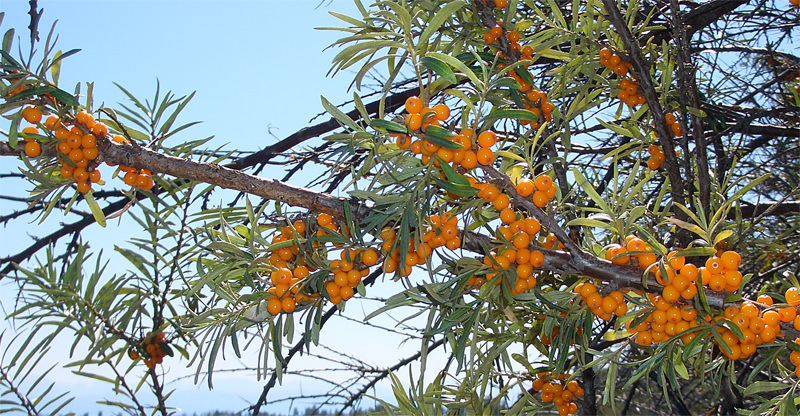 A sea-buckthorn bush with berries

I’ve heard of estimates of 3 kg berry yields per bush per year. Even if we slash that estimate in half I’d still break even after one harvest. After that point all future harvests are pure profit (disregarding maintenance).

Plus, buying a bush would allow me to propagate it and get more bushes which would multiply my harvest exponentially.

(Note: sea-buckthorn requires both male and female plants in a ratio of approximately 1 male to every 6 females. So I’d actually have to buy 1 male and 1 female plant.)

Do you see what I’m talking about?

To me this is a no brainer, and I’m actually going to plant 20 sea-buckthorn bushes this spring that will form a half-circle around the kitchen garden, with the opening facing south to trap the warmth from the sun.

Nature does not care who she works for

She does the work willingly and she does it for free, regardless of if you’re a single individual or a global corporation. All she ask is that you give her time (and some love).

So wouldn’t you want her to work for you?

Right now most of us work a job just so that we can buy the output of natural systems.

Right now it’s mainly big corporations that are profiting from these natural systems. And they’re doing a pretty good job at abusing and destroying Nature in the process.

Instead, imagine an alternative Now where you, me and everyone else reaped the full benefits of these passive, automated, amazing natural systems of abundance.

Don’t get me wrong, for most of human history it’s been hard work to be a farmer and till the soil.

But most of human history it’s also been a pain in the ass to wash your clothes, and look where we are now.

It’s all about designing better systems where you get more output in relation to your input.

Now more than ever we possess the knowledge to create those fertile and abundant food production systems.

This is an important aspect of permaculture design, and one way to create this abundant alternative Now is to make food production more passive and automated.

I think the design methodology in permaculture will play an important part in this, because one way to create this alternative Now is to make food production more passive and automated.

It doesn’t get more passive and automated than planting a tree and other perennial plants.

You plant the tree. You might water it during establishment. But when it has taken off, you just wait. You wait, and every year you stop by and pick up the fruits. You might prune it every now and then, but it’s mostly a waiting game.

And a tree is even better than a dishwasher, because it won’t add a cent to your energy bill.

Why I’m optimistic about the future

The bottom line is that I’m very optimistic about the future and about creating this alternative Now for myself and my family.

When people hear the word self-reliance I bet many people picture think it means going back to how it was 200 years ago, or even longer.

But for me self-reliance is not about throwing out all the new and returning to the stone-age. Self-reliance is about being in control over my time and my life.

I sure don’t plan on chopping up a hole in the frozen river to wash my clothes any time soon.

I do have plans to plant a bunch of fruit and nut trees in the coming years though.

And not long ago the first chickens arrived to the Walden Labs homestead and they have provided us with fresh eggs from day 1. That’s another living natural system that I’m sure I’ll come back to soon.

What do you think about this alternative Now? Would you prefer it over how things are today?