I’ve talked extensively about the drought affecting California this year and the significant impact it will likely have on crop production and agricultural availability in the coming months, but there is another threat that hasn’t gotten nearly as much media attention.

Honey bees are dying and without these natural pollinators, crops suffer.

The honey bee population has been slowly shrinking. Currently, there are approximately 2.5 million honey bee colonies in the United States. Comparatively, there were over 6 million active colonies in 1947.

What’s different about this year, however, is the polar vortex. The extreme cold and record snow fall that has encompassed much of the country this winter has killed as much as 90% of the current honey bee population, but experts won’t really know how significant the impact will be until flowers begin to bloom in the coming months.

Honey is a tasty byproduct of the honey bee and the price of this natural sweetener is higher than ever. Unfortunately, higher honey prices are just the tip of the iceberg. The entire agricultural system would crumble were it not for these powerful insects.

Just How Important are Honey Bees?

In a word…very. The USDA reports that honey bees pollinate approximately 80% of all flowering crops each year. In other words, that about 1/3 of the food most people consume each year.

Apples, broccoli, asparagus, cucumbers and strawberries are just a few of the popular species that suffer when honey bees aren’t around. A decline in the honey bee population could also adversely affect beef and dairy supplies that rely on healthy alfalfa yields for feed.

A study by Cornell University estimated that honey bees are responsible for pollinating $14 billion worth of crops every year – without them, agriculture will never be the same. Combined with the anticipated food shortages tied to inevitable population growth, we could face an outright crisis if honey bee colonies continue to disappear at current rates.

In addition to cold weather affecting the bee population, insecticides commonly used in commercial agriculture have the unfortunate tendency to kill bees as well. This has resulted in many farmers actually renting bee colonies just to pollinate crops; an additional expense that adds to the overall cost of modern agriculture. 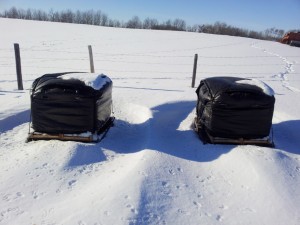 Interestingly enough, the venom of the honey bee has medicinal properties. Arthritis, cancer, epilepsy and depression (among other ailments) can all be treated using venom from the often misunderstood and highly under-appreciated honey bee.

What about Bees from Other Parts of the World?

This one of the first thoughts that came to my mind. Why can’t we just import honey bees from other areas unaffected by the polar vortex and other weather anomalies to make up the difference?

We can – and we do – but the problem is that these non-native bees are simply not as productive as the native born and bred species we have typically relied on. Unfortunately, farmers and bee keepers have been left with no other choice as wild colonies disappear and captive bees face weather conditions that are difficult to survive.

The USDA recently announced that it will make almost $3 million available to farmers in the states of Michigan, Minnesota, Wisconsin and the Dakotas. This money is specifically allocated to assist with projects designed to improve the health of honey bee and other pollinator populations.

As usual, however, government intervention at this stage is too little, too late. Without significant changes in the way farmers use pesticides and a conscious effort to protect this valuable natural resource from decimation, I fear that there is little hope for the honey bee in the years to come.

While the allocation of money to farmers to help with pollination efforts is a start, it doesn’t address the more critical aspects of sustainable agriculture or the consequences of unintentionally destroying the honey bee population as a result of widespread pesticide usage and habitat destruction.