Home Resilience Personal Resilience Innovation vs. Debt: Should We Be Concerned?

I thoroughly enjoy many of the new technological advancements that allow us to become more independent. Whether we are talking about innovations that help in the garden, provide an alternative energy source or provide us with an additional income source, there is no shortage of tech-related products for us to leverage.

Despite my propensity toward these technological breakthroughs, I thought it would be a good idea to look at the flipside of technology. Specifically, how does technological innovation correlate to debt levels?

Not only does technology affect individuals, but there are global implications as well. By investigating the impact of innovation on debt from both a micro and macro-economic perspective, my hope is to find out exactly what implications (if any) our society’s rapid advancement has on debt in the foreseeable future.

It’s worth pointing out that there isn’t a ton of research available when it comes to the correlation between debt and technology. I was, however, able to locate some papers that bring to light some startling conclusions.

Specifically, a paper recently published by Dan Cao and Jean-Paul L’Huiller entitled Technological Revolutions and Debt Hangovers: Is There a Link? was an eye-opening read to the say the least.

The authors look at three major technological revolutions around the world and the resulting debt that ultimately lead to economic collapse. The Great Recession of 2007, the Great Depression of 1929 and the Japanese economic slump in the 1990s were all discussed.

All of these events were preceded by periods of significant innovation that resulted in downright economic failure as consumers and businesses struggled to “keep up with the Joneses.”

The cycle is relatively predictable.

First, productivity increases as a direct result of advancements in technology. The increase in productivity promotes the belief of increased long-term income. As businesses and consumers become more confident in these income projections, consumption levels increase.

Unfortunately, these increased levels of consumption are usually slow to take hold – often becoming popular as the current technological revolution is slowing down. The result is often an economic crisis of varying significance.

How It Affects Us

Since the far-reaching effects of this cycle (as proposed by Cao and L’Huiller) can be difficult to grasp from an individual perspective, let’s take a look at a couple of examples that are easier for us to relate with.

Technology on the farm is a big one. When we look at how farming has changed in the last 200 years, we begin to see the implications of technology (both good and bad) on this vital industry.

In the early 19th century, for instance, approximately 90% of the US population lived on farms and/or produced their own food. Today, only 2% of the population produces food that everyone else depends on.

While this certainly appears to be a positive statistic at first glance, think about what normally happens as supply increases – price goes down. Maybe not at the grocery store, but farmers are certainly getting paid much less for raw crops than previous generations.

In fact, the USDA projects that net farm income in the United States will be 27.5% lower this year than last year.

Think about this for a moment.

Recently I wrote an article discussing the addition of robots on the farm. While this technology boosts production, how long will it take farms investing in this technology to recover the initial costs?

When we factor in the USDA projections for farm income this year alone, is it even worth it for farmers to invest in the technology they desperately need to compete with industrial farming operations? 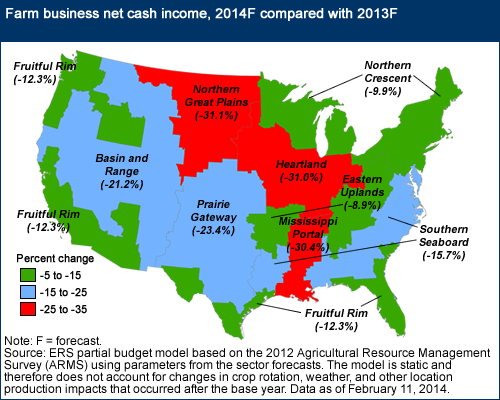 Unfortunately, the answer isn’t clear at this time, but I can’t help but think that maybe farmers are investing in technology too late – at a time when profits are low despite a record year last season.

Could this be the start of another economic slump before this country has even fully recovered from the Great Recession? Only time will tell.

Drones are another hot topic in the agricultural industry right now. Even though legislation is still years behind when it comes to farmer-operated drones, what will happen when drones on the farm are commonplace?

How much will the average farm have to pay to incorporate this technology and how long will it take to get that investment back as production increases? My guess is that it will be years for the average farmer to reach the break-even point and by that time, what new technology will the farm need to remain competitive? 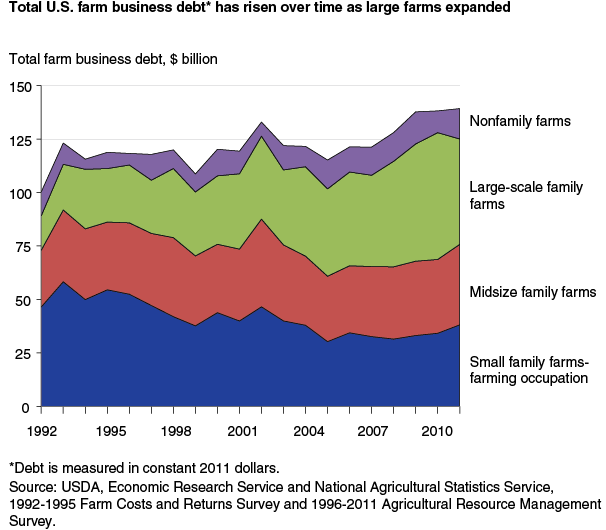 This graph depicts the increase in farm debt in the last few years. Unfortunately, farm income hasn’t changed much during the same time period.

Let’s look at another example: technology in the home.

We like technology. We often measure our success by the things we own and the media loves to talk about how consumer confidence is on the rise once again. People are more hopeful about the future than they were just a few years ago and home technology is big business right now.

Everything from home automation technology to consumer electronics is being purchased at a rate that hasn’t been seen since the beginning of the 21st century.

Investing in this technology increases debt despite many of the benefits these technologies offer.

If debt continues to pile up at this rate, our nation could be on the verge of destroying any progress made in the last few years following the housing bust of 2007 and the associated economic meltdown.

It seems that there is definitely a correlation between the technology we consume and the debt we create.

A farmer can invest heavily in technology today and spend years paying off the resultant loans only to find themselves behind the technology curve once again 5 to 7 years later. In order to remain competitive in the agriculture marketplace, the farmer is forced to invest in new technology and once again must struggle to meet loan obligations.

Likewise, a homeowner could invest in solar technology that is outdated in just a handful of years. Now, the homeowner must decide if there is a financial gain to be realized by re-investing in improved solar technology.

In either example, the result is a cycle; a cycle that could come crashing down assuming the technological boom we are now in is a precursor to economic failure in the next 15-20 years.

Investing in technology is key to resilience, but the separation of cash flows from a capital investment has the same risk as the separation from our food supply. The more we proceed without awareness, the easier it is to find yourself on the short end of the stick. Food companies stuff you with zombie food, banks will stuff you with a mountain of debt.

Recognize the cycle and you can avoid making poor financial decisions.