Sometimes I feel like no matter how much I write about (or talk about) alternative energy solutions, the ideas fall on deaf ears. Of course, I am not referring to our own community, but rather those on the “outside” who need to learn that there are other options available.

With some of the new solar technology coming to market right now, it’s not difficult to become completely energy independent. Perhaps some of the opposition faced by alternative energy is simply because people do not understand enough about the technology. Maybe it’s because most people are wary of change.

It could be the high initial costs typically associated with installing alternative energy solutions. Or maybe, it’s some combination of all these reasons conspiring to keep alternative energy in a dark corner labeled as a “fad” that will dissipate soon.

Today, I would like to provide real evidence that alternative energy on a small scale is not a fad. In fact, it is the future of power generation for business and residential customers alike.

What is a Microgrid?

While we have discussed full energy independence many times in the past, I don’t think I have ever used the word microgrid to define it. This is because many of the solar projects I have written about still relied on the grid as a supplemental power source. 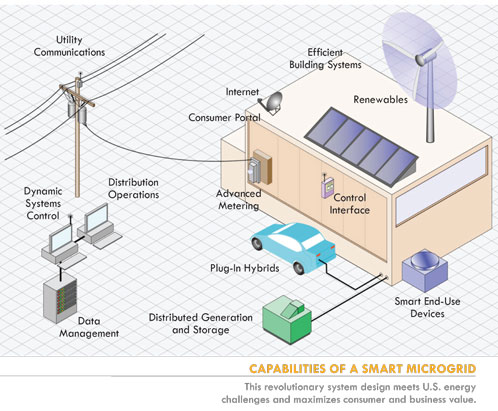 There are a couple of advantages to remaining tied to the grid after making the leap into alternative energy production. If you are fortunate enough to produce more power than you need, this excess energy can be sold back to the grid. I know some people who are generating hundreds (in some cases even thousands) of dollars each month by selling energy to the local utility company.

The other benefit is perceived reliability. I don’t like the idea of relying on any person or business other than myself whenever possible, but a few cloudy days in a row can be enough to make your solar power generation system practically useless. Remaining tied to the grid means that during these times, there is no interruption in the power supply at home.

Unfortunately, there are also some drawbacks to remaining tied to the grid. The biggest is that most solar systems cease to function if grid power fails. This is a mandated safety feature that prevents backflow from charging downed power lines and possibly injuring utility employees.

The problem is that it seems silly to invest heavily in alternative energy only to still experience power outages when the grid fails for any reason. Of course, there are ways around this – such as installing a backup generator and grid cut-off switch – but it’s an important consideration when contemplating an off-grid lifestyle.

Another problem with remaining tied to the grid that has become prevalent just recently is the extra costs you may be charged by the local utility company.

In Arizona, for instance, legislation was just passed allowing a local utility company to charge customers with solar cells an additional fee each month to allow for “additional grid maintenance” as excess power is fed back into the grid.

Obviously, the real issue is that power companies around the world are losing revenue everyday as more people adopt alternative energy solutions.

A perfect example is San Diego Gas & Electric; a company who recently lost an $850,000 per month utility company. University of California, San Diego recently completed a complete microgrid system capable of supplying the entire campus with 92% of its power needs. The result is a $10 million a year revenue loss for the Southern California utility company.

At the same time, California public utilities are in a legislative battle to add $120 per year to the bills of customers using supplemental solar power to cover the same cost of “maintenance” that HEI is complaining about. Currently, there are approximately 600,000 houses in California using solar power.

Similar problems are being faced by utility companies around the world and the business – which has held a monopoly over businesses and residential customers for 100 years – is struggling to deal with these market changes.

So, long story short, a microgrid is a modern, small-scale version of the centralized electricity system most of us rely on. It is what Feldheim, Germany uses to provide power to its residents (you can check out the article about Feldheim here) and the same ideas can be applied in a single home residential setting as well.

New Technology Could be the Difference

By this point you might be wondering why I think these microgrids are going to become a significant portion of the overall power picture in the next few years. In a word the answer is technology.

Most of us do not have an annual budget even close to the University of California and this has been a problem for many people wanting to go solar in the past. New technology is changing that dynamic as we speak.

Consumers, businesses and even investors are all beginning to realize the potential inherent to alternative energy technology. With this increased popularity and acceptance comes a much needed benefit: lower costs.

Everything from micro-inverters to smart microgrid control units are much more affordable than they were just a few years ago. This means that in most cases it is financially feasible to go completely off-grid and the prices continue to plummet.

In fact, solar technology is almost to a point where government subsidy is not needed at all to make it a cost-competitive energy alternative.

Also, there is an abundance of new technology coming out (as early as this year) that could completely revolutionize the way we think about energy independence. One of these innovations is known as the Beacon 10. Created by Dean Kamen (inventor of the Segway), the Beacon 10 uses technology originally created in the 1800s to make energy independence a reality for millions of people.

If you want to learn more about the Beacon 10, check out this month’s issue of Resilient Strategies. I will be looking at this innovative technology is detail and explaining exactly why I think we could be looking at a literal turning point in our quest for sustainable energy independence.

Despite resistance from large utility companies, products like the Beacon 10 could provide a realistic alternative energy solution for millions of people in the next 2 – 3 years. The idea of the microgrid is finally becoming a reality for almost everyone and it couldn’t have happened at a better time.