Is your dream to live off-grid in any place of your choosing? The tiny egg-shaped Ecocapsule could be the low-energy home you’re looking for. Designed by Bratislava-based Nice Architects, the Ecocapsule is a micro-shelter that packs an impressive sustainable punch—the ultra-portable house is powered by solar and wind energy, and also includes rainwater collection and filtration.

That’s how Inhabitat pitches the neatly designed Ecocapsule, and it sure sounds wonderful. But before we take a closer look at the Ecocapsule, let’s start with being a bit realistic about living off-grid “in any place of your choosing”.

Often the problem with living off-grid is not shelter, it’s access to affordable land. You can’t just air-drop an Ecocapsule in a place of your choosing and live happily ever after, you need to rent or buy land.

“Off-grid” property can easily cost hundreds of thousands of dollars, and the kinds of properties that are actually affordable might not be the off-grid heaven you’ve been dreaming about. 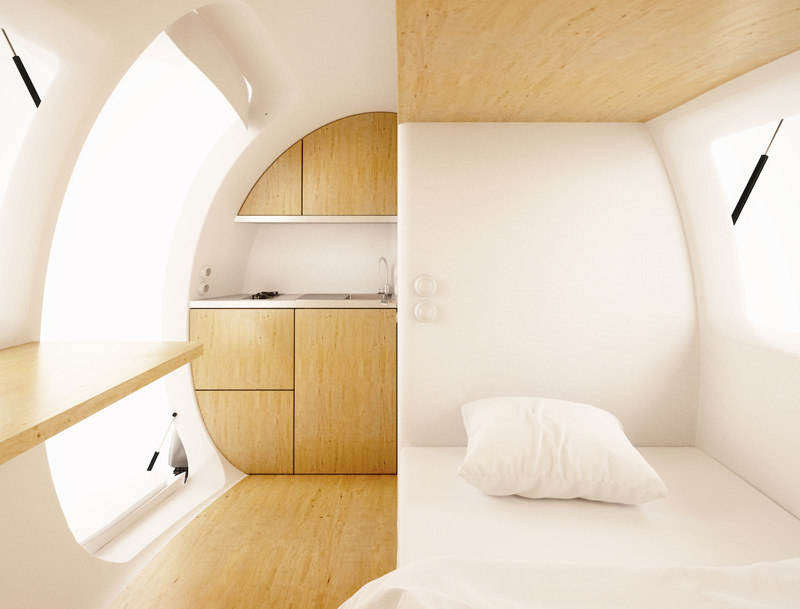 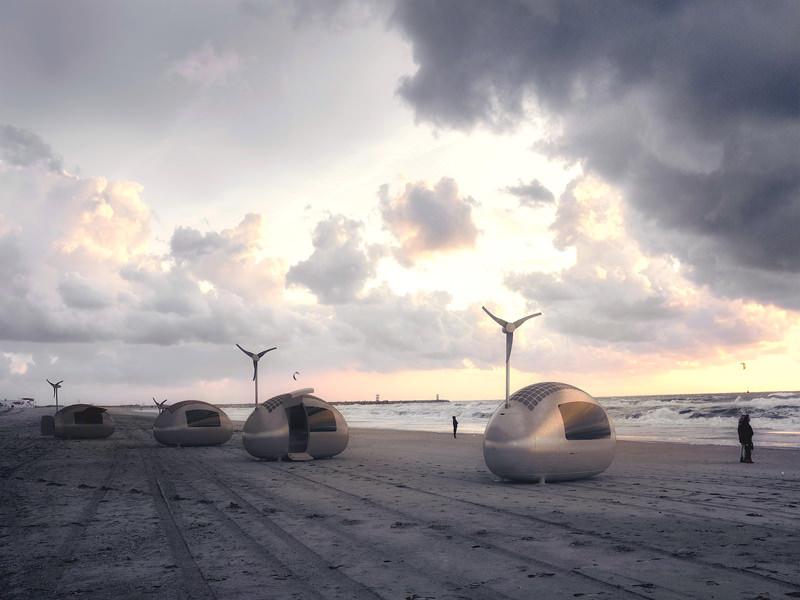 The body of an Ecocapsule is covered with 2.6m2 of high-efficiency solar cells (600W output) and a retractable pole holding a 750W wind turbine is attached to the body. This will supposedly be enough to support you with energy for almost an entire year in many off-grid locations.

The dual-power system and high-capacity battery (9,744Wh capacity) ensures the shelter will stay operable even during times of low solar or wind activity.

The spherical shape is also optimized for the collection of rainwater and dew and the built-in water filters allow you to utilize any water source. 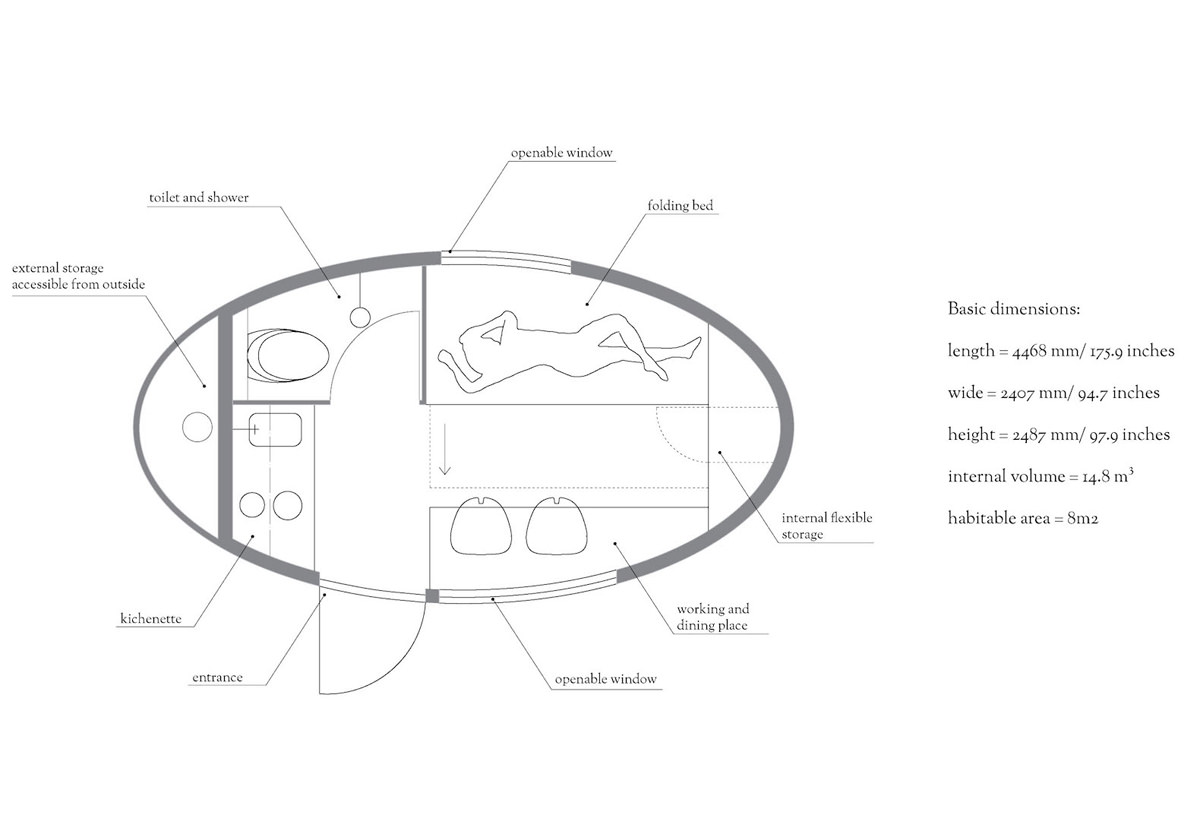 Each Ecocapsule weighs 1,500 kilograms and can fit inside a standard shipping container. Nice Architects gives some shipping estimates on their website, for example if you live in New York it could cost you around 2,200 Euro / 2,400 USD to get the Ecocapsule delivered to the nearest port.

Now, my first thought when I saw the Ecocapsule was “Why didn’t they put wheels on it?”. Not having wheels on the Ecocapsule will limit the off-grid locations where you can place it, because you’ll pretty much need a lifting crane to get a 1,500kg Ecocapsule off of a trailer. Nice Architects does say on their website that they’re also developing a camper version, so stay tuned for that.

The reason for launching a fixed shelter first might just be that they don’t want people to view the Ecocapsule as a “luxury RV”. Because let’s be honest, any RV will let you live off-grid anywhere in the world. What makes the Ecocapsule stand out is the integrated energy system and rainwater catchment.

My take on the Ecocapsule

What first struck me about the Ecocapsule was the many similarities to the Dymaxion House that was conceived and designed in the late 1920’s by Buckminster Fuller and later built in 1945. Roughly the same weight as the Ecocapsule, The Dymaxion House was Fuller’s solution to the need for a mass-produced, affordable, easily transportable and environmentally efficient house. (in terms of looks it also flirts with the classic Airstream trailers) 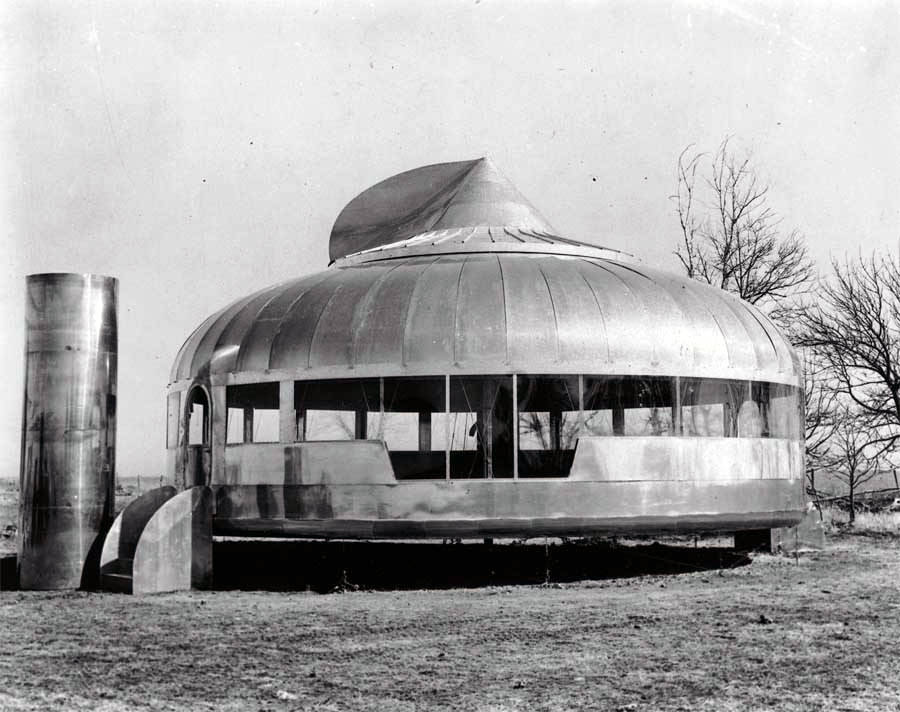 The Dymaxion House. As you can see it’s much bigger than the Ecocapsule

Bucky designed a home that was heated and cooled by natural means, that made its own power, was earthquake and storm-proof, and made of permanent, engineered materials that required no periodic painting, reroofing, or other maintenance.

The Dymaxion House was to be leased, or priced like an automobile, to be paid off in five years. All this would be possible now if houses were engineered, mass-produced, and sold like cars. $40,000.00 sounds about right.

Toward the end of WWII, Fuller attempted to create a new industry for mass-producing Dymaxion Houses but it never took off. The Dymaxion House might simply have been before its time.

But is humanity ready today for an affordable, mass-produced house?

I’d say yes, considering many young people can’t even afford the down payment of a home these days. It’s time to rethink the matter of shelter, both in terms of how we build them and how big is “enough”. The Ecocapsule “comfortably houses two adults” and maybe even an infant but that’s about it, i.e. if you have kids or plan on starting a family then the Ecocapsule might not be for you. Of course, you can always buy another Ecocapsule as your children grow up but I’m pretty sure there are more financially sound shelter options our there for growing families.

Of course, access to shelter goes hand in hand with access to land. Even if the Ecocapsule would cost a meagre $10,000, that won’t help you if you still have to shell out $100,000 for a piece of land.

I don’t think the Ecocapsule is a no-brainer, but it does show potential. Aside from proving that Nice Architects can deliver a quality product, I think the success of the Ecocapsule will come down to affordability (they’ll announce the price in Q4 this year).

To have a shot at really making a difference in satisfying shelter needs worldwide they need to get their production costs down so they can mass-produce this thing at a good price.

If not, the Ecocapsule might end up being yet another luxury niche shelter. Looking at their website though, maybe a niche shelter is what they want as they’re positoing the Ecocapsule as a potential “independent research station” or a tourist lodge, emergency housing or a humanitarian-action unit.

Mass-production is the only sensible way to make a shelter such as the Ecocapsule viable for the broader masses, or possibly if you sell it IKEA-style as a DIY-kit. But what you gain in terms of lower costs you lose in flexibility. With the solar cells, wind turbine and water collection / filtration all built into the Ecocapsule you can’t easily repair or upgrade parts down the road. You can’t just unplug the solar cells and plug in new ones. With this in mind, the Ecocapsule is clearly not designed to last for generations. But that’s not necessarily a bad thing, as long as the price is right.

Another question mark that came up: They state on the website that it has a flushing toilet. That makes me wonder, how do you manage the waste? And considering the limited water storage is flushing down your feces really the best use of the limited water you have? A better alternative in my mind would be a composting toilet. Not as “fancy”, but certainly more manageable in terms of maintenance.

I’d love to hear your thoughts. Would you want to live in an Ecocapsule if the price was right?