Home Big Picture Where Has 100 Generations of Human Life on This Planet Brought Us?

According to OECD a human generation typically ranges from 22 to 32 years, but let’s assume an average of 25 years. That means 100 generations of human life takes us back 2,500 years. Do you think humanity has progressed in this time? Or how about just in the past few centuries?

By the looks of it we’ve come a long way. We’re driving cars instead of horse wagons, we’ve conquered the skies, we can communicate instantly across the globe, we can walk into a supermarket and find a selection of food that the kings and emperors of old couldn’t even dream of, we’ve put men on the moon, and we’re surrounded by amazing technology and medicine that our ancestors just two hundred years ago would think of as magic.

But is this what life and 2,500 years of progress is all about? Faster transportation and a greater selection of food?

Are humans happier now than 2,500 years ago?

I think not. Below you’ll find something written by Sweden’s greatest author of all time, Vilhelm Moberg, who does a better job conveying my thoughts than I ever could. 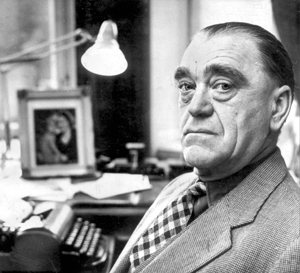 Where has one hundred generations of human life on this planet brought us? It sure has not made the planet more tolerable to live on. Man has but accomplished one thing: to make his life more complicated. He will also likely continue to succeed in that effort. In all other respects, he has convincingly demonstrated his incompetence.

But there are still optimists out there that believe that a single generation will succeed in what the preceding one hundred generations have failed to do!

A house can be outfitted with the most fantastic comforts. A dwelling can be hygienic bordering the amazing. In the dining room you can find food, cooked after strictly scientific calculations according to what the body needs, on the table at the press of a button. But what good does all of this do, when the house is inhabited by unhappy people?

The Machine was only beneficial as long as it contented itself with satisfying purely elementary needs. So long it eased the difficulties of Man and made his days and nights more liveable. But then instead it started towering up difficulties for him by producing such that for him is totally extraneous. The Machine started producing the needs instead of satisfying them. And with that begun the world crisis that we’re now living through. Things were invented that do not concern us. But it was in the interest of the industrialists to make us believe that we couldn’t live without their products. One comfort after the next got a name and reputation of being indispensable. The general perceived opinion was that manufacturers knew better than we do, what we really need.

As the artificial needs have increased in number, so has the discomfort and unease of modern man. You wear yourself out prematurely to get all the things that you could very well be without. You’re plagued by the anxiety of not being able to enjoy all the new things that this time has to offer. You’re plagued by the fear of losing all the things that you’ve with sweat and effort have acquired and see as indispensable. And the more needs you’ve acquired, the harder it has become to satisfy them all. Always, somewhere, there’s a whimper of dissatisfaction. And so you’re hurried along to try and ease the pain. It’s like when you try to stop a barrel from leaking, where new holes are constantly appearing.

Industrialism has thus finally become more of a misfortune than a fortune for humanity. We must free ourselves from the imaginary notions it has imbued in us about what we can and can not live without. The artificial needs must be cut away, even if it hurts. Thus our daily worries and work for survival are eased. Time is freed up for man to grow his purely spiritual possibilities. The Age of the Machine is primarily material. Our time has not had the peace and quiet to bring forth anything else.

People object that there’s no way back – that the “inferior culture”, where farmers live, can’t come into question for the Era of Great Progress. But the deciding factor of the problem is in my opinion that farmers of the old tribes lived lives of considerably more freedom and dignity than the need-slaves of our age. Though they constantly speak about the freedom that they think they possess.

I’m quite certain that Vilhelm Moberg read and was inspired by Henry David Thoreau. As Thoreau writes in Walden…

The necessaries of life for man…may, accurately enough, be distributed under the several heads of Food, Shelter, Clothing, and Fuel; for not till we have secured these are we prepared to entertain the true problems of life with freedom and a prospect of success.

The industrial age sure has created a lot of material wealth and the so called higher standard of living. But it has also surrounded us by all of these things that we really don’t need to live a good life. Yet we buy them anyway because we think we need them to be happy – to feel satisfied.

I think it’s time for humanity to at least start the process of identifying and cutting away all of these artificial needs that has arisen during The Age of the Machine, and instead focus our life energy on what really makes us happy.

When we’ve freed ourselves from the never-ending pursuit to satisfy basic survival needs as well as all the artifical needs only then are we free, and only then can the real pursuit of happiness begin.

You or I won’t change the world. But you can change your own life starting now. You can be content. You can be happy. And you don’t need all of these things to live a good life.

I’m giving it a try. After all, what do I have to lose?