As interesting as that topic is (I think we’ll see that market explode within the next decade), it’s difficult for many of us to relate to anything happening at a large commercial farming operation.

But don’t worry – a new invention created by a 23 year old Cal Poly graduate is changing that right now.

Aronson came up with the idea for FarmBot after a local farmer spoke in one of his Cal Poly classes about a new tractor equipped with a camera and computer. The tractor is capable of tiling the ground differently depending on the plant being cultivated in the area. Aronson decided he could achieve similar results sans tractor.

Most of you know how much I like 3D printers and FarmBot is basically a 3D printer without the plastic. Rather than extruding plastic, FarmBot is equipped with tools specifically designed for growing plants including a seed injector, a watering nozzle and multiple sensors to monitor the garden.

FarmBot can maintain your garden from start to finish; although it’s not equipped to harvest your produce…yet.

There are hundreds of reasons why I am excited by this product but I will try to share only a few here.

That means anyone can purchase the product and modify it as they see fit to create a custom automated gardening solution. It is completely scalable and is designed to be tailored to each garden.

Whether you grow in a backyard, on a rooftop or in a greenhouse, FarmBot is ready to go.

The first iteration of FarmBot, referred to as FarmBot Genesis, is being manufactured right now at SLO Makerspace. For those of you unfamiliar with the concept of makerspaces, they are collaborative workspaces full of machinery that anyone can use to create products of all shapes and sizes. 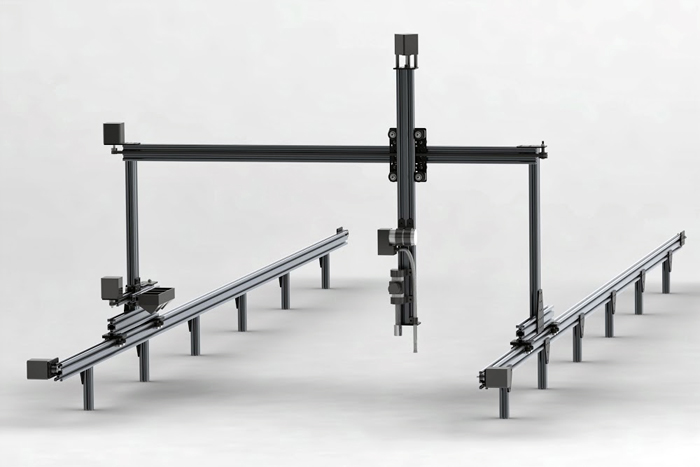 The information the machine uses to tend specific crops comes from another open source project known as OpenFarm. Basically, OpenFarm is similar to Wikipedia but focuses exclusively on gardening and farming knowledge.

You might think FarmBot is one of those cool ideas that might make it to market sometime in the next few years.

You would be wrong.

Thanks to a $125,000 grant from the Shuttleworth Foundation, Aronson and his team (which collaborates from around the world) is already busy producing the first production models of FarmBot.

Although a retail price hasn’t been officially announced, FarmBot is likely to sell for less than $1,000 per unit. When you think about how much technology is jammed in to this device that is an extremely reasonable price and attainable within most budgets.

Implications for backyard gardeners around the world

Using a computer, anyone can tell FarmBot where and how to plant a garden. Although it appeals to everyone looking to streamline gardening using cool technology, it is especially useful for new gardeners and for people with mobility issues.

New gardeners are often unsure of plant-specific gardening techniques like how far away plants should be placed, how deep seeds should be sown and how much water to add. FarmBot takes care of all this with the push of a button.

People with mobility issues may be forced to scale down gardening efforts as maneuvering through the garden becomes increasingly difficult. FarmBot allows everyone to grow organic produce at home without the physical effort typically required.

An official release date for the product isn’t available at this time, but Aronson hopes to have the retail product available by the end of this year.

I don’t know about you, but I am more excited than ever for the 2015 planting season. Expect a full review of FarmBot once I can get my hands on one of these.