As you are aware, I have been very excited about some of the new developments occurring in the solar space this year. I have covered a few of these advancements already and as the long-anticipated U.S. Department of Energy-sponsored Solar Decathlon Europe 2014 approaches, even more interesting ideas are coming to the table.

I wanted to discuss a couple of these new ideas here, but in total, there are approximately 20 universities from around the world planning to showcase new ideas as part of the competition (which begins in Versailles on June 28th).

The goal of the competition is to build a home that can function completely independently from the grid using solar power for a period of two weeks. Unlike many current solar solutions designed to supplement existing power sources, these designs are completely off-grid right from the start and certainly represent what the future home could look like.

Solar Skins for Your Home

One of the interesting developments this year comes from a team of Dutch designers that have designed a way to make existing homes more sustainable using a “skin” of solar PV cells. Although the designers, from Deft University of Technology, refer to this new technology as a skin, it is more akin to a secondary structure built over the top of the existing home.

The design also helps to regulate the internal temperature of the home by producing a greenhouse effect during the winter. In the warm summer months, the structure can be opened to provide airflow. Hot air is routed underneath the home to cool and is ventilated through the homes existing chimney.

While this design may not work as well in suburban areas due to questions about cost-effectiveness, it was designed for the all-to-common row homes that spring up after World War II. There was a serious housing shortage in the Netherlands after the war and these row homes were a cost-effective solution at the time, but rapid construction came at the expense of energy efficiency.

That said, there are many urban areas in America with similar rows of homes that could benefit from a design like this.

The project is officially known as Prêt-à-Loger, which means “ready to be lived in.” In other words, the solar skin can be constructed while residents remain in their homes; an important aspect for creating a mainstream sustainability solution for low and middle income families around the world.

If you’re not a fan of building a secondary structure over your existing home to add a degree of sustainability, consider the work being done by Oxford Photovoltaics; a company founded by Oxford physicist Henry Snaith.

His company is using a material called perovskite to create thin-film solar PV cells that can be printed directly on glass panels. The result is a semi-transparent window that piggybacks on the growing trend known as building integrated photovoltaic, or BIP. 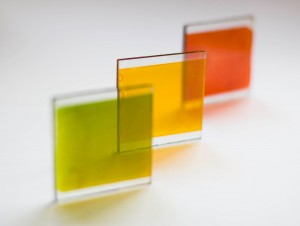 The semi-transparent nature of these windows means they may not be quite ready for the windows in your home just yet, but it is a perfect solution for large office buildings. The large amount of window glass used in the construction of a typical commercial building could capture enough solar energy to power most (if not all) of the buildings lighting and IT systems.

What’s interesting about perovskite (a calcium titanium oxide) is that it is less expensive to produce and boasts a higher efficiency rating than traditional silicon-based thin-film solar technology.

The window glass is manufactured by applying a wet coating of perovskite to the glass before sealing the window with another sheet of glass to protect the coating.

Even if this technology doesn’t make it into the residential housing market any time soon, the fact that this technology could increase the overall efficiency of our nation’s high-rise structures would represent a significant cost savings while lessening the electric load on our antiquated grid infrastructure.

It’s worth noting that this technology is still in its infancy and Oxford Photovoltaics doesn’t expect mass production of these innovative cells to start until 2017, but I think this idea holds significant value, especially as the population in urban areas continues to skyrocket.

What I really like about both these ideas is that the designers aren’t afraid to think outside of the box. Instead of simply accepting that solar cells go on the roof and working within the constraints of the design, these individuals are reinventing the very idea of solar PV right before our eyes.

My hope is that innovations like these are exactly what solar technology needs to propel us into a more sustainable future. I’m excited to see what other new ideas come out of this year’s Solar Decathlon Europe and I will be sure to keep you informed as they are unveiled.