We love technology at Resilient Communities. The way I see it, any cool gizmo or gadget we can use to further our efforts in self-sufficiency, the better off we are.

Granted, many of these technological advancements won’t be available forever but why not take advantage of them while we can?

Whether it’s a robot that can monitor the health of our garden automatically, a cell phone application that controls lighting and HVAC in our home or a 3D printer capable of producing an assortment of household items, there is certainly no shortage of interesting technology we can use in our quest to become more resilient.

It seems like everyone has been bitten by the technology bug (for better or for worse). The fact that people “need” a new cell phone whenever an updated model is released is a perfect example of just how tech-oriented society has become.

In fact, a recent Gallup poll (see below) shows us just how much modern technology has embedded itself into society. 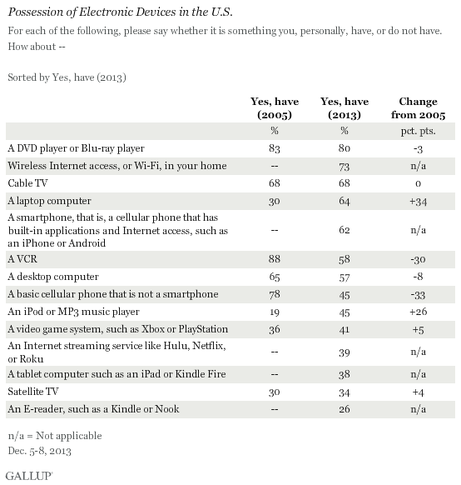 So what does all this mean?

Despite the tangible benefits that technology provides to us on a daily basis, there is an increasingly serious problem caused directly by massive electronics manufacturing.

That danger is e-waste.

As the number of these devices reaching retirement continues to increase, figuring out what to do with the waste is becoming a hot topic (and a big problem).

As humans, we have accepted the fact that society is wasteful. From the trash we throw into landfills to the abundance of micro trash scattered throughout our natural resources, it’s no secret that we are a sloppy species that often appears hell bent on destroying the planet we call home.

As our reliance on technology continues to increase, the amount of e-waste we produce follows closely.

A 2013 Columbia University study reports that global e-waste discarded in 2009 was nearly 50 million tons and predicts that number to be over 72 million tons annually by the end of this year.

In the United States alone, we produced over 10 million tons of e-waste each year – second only to China which produces 11.1 million tons annually. These figures are expected to rise exponentially as technology continues to dominant the consumer marketplace.

Not only do we have to figure out a way to deal with all this waste but we also need to address the growing concern of harmful e-waste chemicals leaching into our soil and natural water supplies. Precious metals including gold, silver, palladium and platinum are found in most modern electronic devices.

Toxic chemicals such as mercury, lead, cadmium and beryllium are also found in most e-waste. Long-term exposure to these substances presents a serious health risk and can even lead to death in some cases.

Did you know that one million cell phones contains over 35,000 pounds of copper, 772 pounds of silver, 75 pounds of gold and 33 pounds of palladium (according to the EPA)?

Although I couldn’t find a statistic for the amount of harmful chemicals found in one million cell phones, the above figures give us a good idea about just how severe the threats from lead, mercury and cadmium likely are.

The graphic below shows how prevalent these threats are in practically every electronic device we use. 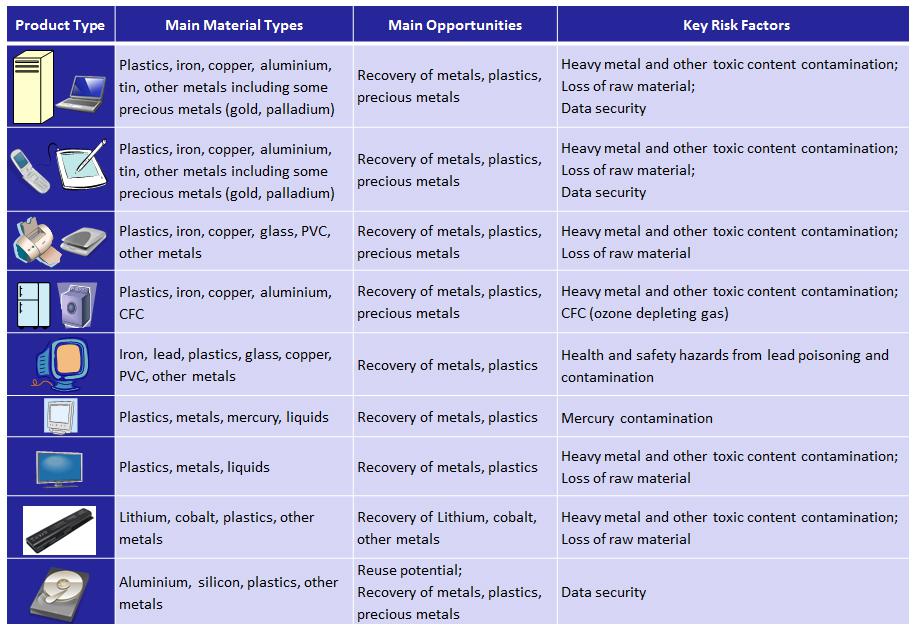 As the e-waste pandemic continues to snowball, how can we keep these dangerous substances from polluting our natural resources forever?

Recycling e-waste (often known as e-cycling) is the best way to limit the growth of the environmental threats posed by increased electronics manufacturing around the world.

Unfortunately, some estimates have stated that only ~20% of e-waste is properly recycled at this time. Which begs the question: “Where is the rest of it going?”

Most e-waste ends up in landfills where harmful chemicals can leach into groundwater supplies and contaminant nearby soil. This will continue to happen until a better solution(s) is created that can properly deal with e-waste and its associated hazards.

Although not a solution itself, The Green Electronics Challenge hopes to find solutions to our e-waste problem. The international online competition encourages people from the United States and China to submit ideas for reducing e-waste via Instructables.com.

The hope is that this competition nets at least a couple of practical ideas capable of addressing e-waste at some level – local, national or global.

Some of the ideas submitted so far include upcycling (modifying an existing product to serve a new purpose), repairing broken and discarded electronics, creating new sustainable electronics and even creating artwork from used electronic waste.

Who knows if any of these ideas are viable for the long-term, but I especially like the idea of upcycling.

Look around your house. Is there an old electronic product lying around somewhere that could be repurposed somehow?

Granted – we can’t all turn a “Speak & Spell” into an intergalactic communications device but with a little effort most of us could do something on a local level to reduce e-waste.

If nothing else, we should do what we can to recycle any and all e-waste possible.

That means going beyond just the electronics we use on our own homes. What about setting up a local e-cycling drive in your community or educating neighbors about the growing e-waste epidemic?

I’d be interested in hearing any other suggestions our readers have about ways to e-cycle, upcycle or otherwise reuse things that normally end up in the trash. What do you think?