Although the trend is only just starting catch on in the States, European countries adopted green-roofs years ago as a way to provide insulation, create habits for local wildlife, improve oxygen levels in urban areas and control water runoff.

A newer trend that is quickly gaining popularity around the world is rooftop farming. Rather than planting only vegetation, rooftop farmers are cultivating entire gardens complete with multiple fruit and vegetable species in the unused space atop large urban structures.

The largest of these rooftop farms is located in a surprising place – Brooklyn, NY.

The farm at the Brooklyn Navy Yard is an impressive 65,000 square feet currently operated under a 20 year lease agreement with the Navy Yard. Combined, the two farms cultivate over 50,000 pounds of organic produce each year which is sold to local restaurants and directly to customers via multiple farm stands.

Brooklyn Grange also operates its own CSA. Although the CSA currently only has about 40 members, interest in the project is growing and many people are even working as urban farmers on a part-time basis; learning the intricacies of operating a fully functional farm on top of a concrete structure.

The farm even has chicken coops and beehives on site to round out the farming experience.

Rooftop farming isn’t as simple as laying down soil on the roof of a building. There are structural considerations (i.e. making sure the roof can support the weight of the farm) and drainage issues to contend with.

Brooklyn Grange laid down a green-roof system in both locations before adding soil. The system includes a root-barrier (which prevents plant roots from damaging the roof’s surface), a thick layer of felt, drainage mats designed to store excess water during heavy rainstorms and a thin layer of felt to separate soil from the drainage mats.

The soil used at the farm is an organic compound made specifically for rooftop farming. The blend is called Rooflite and it is distributed by a Pennsylvania company specializing in green roof growing media.

Rooflite is essentially a mixture of compost and small porous stones. The stones help make the soil lighter and aerated. As a secondary benefit the stones breakdown slowly – adding trace minerals back into the soil in the process.

Planting beds at the farm are between 8” – 12” deep; plenty of soil to grow a variety of fresh fruits and vegetables including tomatoes, salad greens, peppers, kale, bok choy, carrots, beans, radishes and chard to name a few. 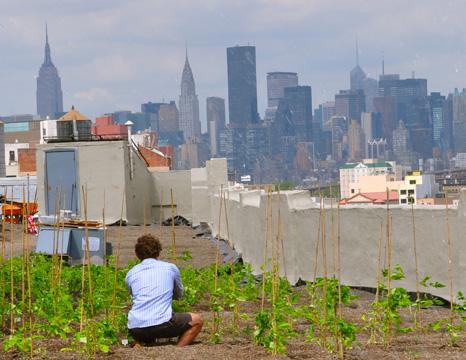 The farm practices 100% organic farming techniques, but is not USDA certified as an organic grower and according to the company website, Brooklyn Grange doesn’t plan to apply for certification anytime in the near future.

Brooklyn Grange started in 2010 and even that first year, the company was able to break even despite investing in the farm structure. Every year since that time the farm has steadily increased profit margins thanks in part to a successful Kickstarter campaign, donations and private investments.

The fact that the farm is turning a profit should help make the trend more popular. Similar farms are currently under construction in Boston, Chicago and Toronto (which already has a significant green-roof following).

Another benefit to the rooftop farming idea is that crops are protected from harmful chemicals usually found in the soil of urban areas. I recently wrote an article about lead, cadmium and harmful industrial cleaners in the soil of urban backyards. These contaminants can make urban gardening difficult, if not outright dangerous.

Growing several stories above the ground, plants in a rooftop farm are protected from these threats. The plants also help to clean the air; adding additional oxygen to areas accustomed to less-than-ideal air quality conditions.

I’m not saying that rooftop farming is going to replace the large rural farms that our food supply depends on, but if we can learn to foster a relationship between urban and rural farms that focuses on high-quality food production, we will be better able to address the imminent food shortages forecasted to become a serious threat in the next 20 – 30 years.

Given that the farm is actually making money, big investors are beginning to take notice. Hopefully, the influx of capital from investors catapults rooftop farming into a legitimatized agricultural technique instead of just an innovative trend.