As we move ever closer to 2050 and add an additional 2 billion people to the planet in that time, it’s no secret that many of our current food production methods simply won’t provide the scalability and sustainability we desperately need to support our growing population.

Some companies are investigating ways to genetically modify plants and animals to improve hardiness and decrease time to harvest. Unfortunately, there are assorted risks associated with modifying nature to meet human needs.

Obviously, there are more sustainable and Earth-friendly ways to create an abundance of fresh produce and protein, but we still have a long way to go.

Well…maybe not so long after all.

Open Blue Sea Farms is a 10 year old company that has taken a completely different approach to sustainable aquaculture (fish farming). Rather than raising fish in tanks where cramped quarters and swimming in excrement are the norm, Open Blue keeps its fish in the open ocean; far from pollution and in their natural environment.

The result is a sustainable fish farm that can produce up to 250 tons of fresh seafood every year at current production levels – a figure that is easily scalable according to Open Blue’s founder, Brian O’Hanlon.

The idea behind Open Blue is that when animals are raised in their natural habitat, the end product is healthier and tastes better. And, using the right technology, these fish have the potential to grow more efficiently than conventional fish farming techniques allow.

I definitely agree with the healthier part as there is a marked difference between wild fish and those raised on farms. Without jumping into too much of a tangent, consider my recent experience fishing for rainbow trout in a local lake.

I ended up catching three trout. Once cleaned and ready for the grill, it was obvious that two of the fish had a distinctive reddish color to the fillets (similar to salmon) while the third had fillets that were completely white.

The fish with white meat was farm-raised and added to the lake as part of a restocking plan. The two fish with red meat were naturally born in the lake.

I’m not a biologist, but something causes this color difference. Maybe it’s the diet, maybe the confinement or maybe it’s some combination of factors, but the point is that the trout raised in a fish farm exhibit noticeable differences from their naturally raised counterparts.

So, all that simply to say that fish raised in large nets in the open ocean – where the fish eat natural foods and swim in a natural environment – are not prone to the same physical changes that affect fish raised in a traditional aquaculture farm.

Which would you rather eat given the choice?

Currently, the fish farm is located in the open ocean off the eastern coast of Panama. O’Hanlon says he chose Panama because there was much less red tape; an important consideration for such an experimental idea.

Ultimately, he hopes to scale the fish farm and add additional farm locations off the coast of California, but current regulations make it a difficult and expensive move at this time.

Despite being located in Panama, the fish from Open Blue is ready to serve in American restaurants in approximately three days. This is a perfect amount of time for rigor to loosen – offering diners a perfectly tender fish that is easy on the taste buds.

The pods used to house fish in the open ocean are large enough to hold approximately 35,000 fish each. Each fish can fetch as much as $60 on the wholesale market. As the demand for fresh seafood continues to grow, O’Hanlon and his team could be sitting on an emerging and profitable trend.

A variety of sensors, cameras and feeding equipment are housed in a large center support beam. Scientists are able to monitor the health of the fish around the clock and keep a close eye on how changes in diet affect the overall behavior of the species.

You might think O’Hanlon decided to grow a conventional species like salmon; a fish that currently represents a $10 billion per year industry.

Rather than follow the crowd, Open Blue is attempting to create a new market for a fish that until recently, I had never heard of myself.

Cobia is a large saltwater fish offering a few important benefits over other species commonly raised throughout the world.

Cobia goes from egg to an 11-pound fish in one year. Salmon, by comparison, takes three years. Cobia doesn’t taste extraordinarily fishy like carp and the meat is of a high-enough quality to be used in premium sushi products unlike another popular farmed fish, tilapia.

Perhaps the only downside to farm raising cobia at this time is the relatively high feed-conversion ratio (FCR). FCR refers to how many pounds of food it takes a fish to produce one pound of meat. Tilapia and most species of carp have an FCR of 1.6 to 1.

Unfortunately, cobia is closer to 2 to 1 at this time, but Open Blue Sea Farms has been working to reduce the FCR of the fish naturally through experimentation with diet and various habitat variations. 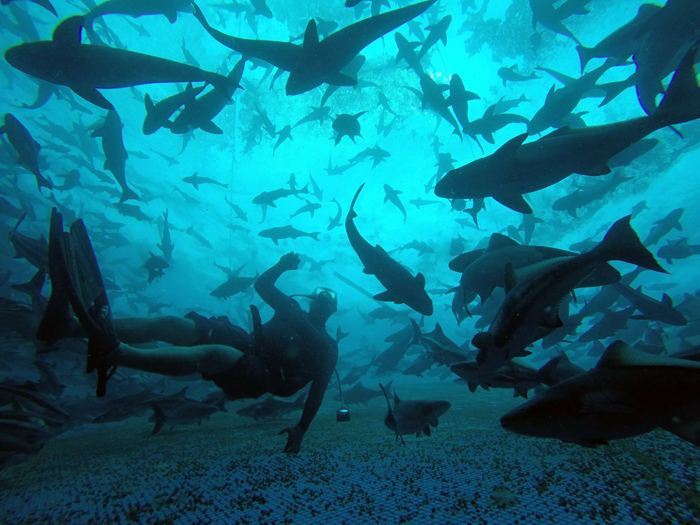 O’Hanlon believes that cobia’s FCR will rival that of salmon one day in the near future; marking a possible turning point in the way we think about sustainable aquaculture and the fish species we are most likely to encounter on our favorite restaurant menus.

While I have yet to try cobia myself, I like the idea of fish swimming “freely” in their natural habitat and getting to market quickly.

Innovations like these are the kind of changes we need if we expect to maintain the same degree of food availability we currently enjoy.

As our population continues to increase, sustainable farming methods (for both produce and protein) are necessary – a topic that O’Hanlon and company are addressing right now.