Boiling water must be one of the most mundane and common activities in daily life whether you’re at home or in the great outdoors, yet not much has happened in this area for the past few millennia.

But there are people who are working to improve how we boil water in the outdoors and one of those people are Devin Montgomery who is the man behind the company Boilerwerks. The result of his experimenting is the Backcountry Boiler.

In his words the Backcountry Boiler is “a faster, lighter and more wind-resistant way to heat water for dehydrated meals and hot drinks using sticks, cardboard, or virtually any burnable material.”

As you’ll see it has a very interesting design, and it sure managed to impress me.

The first factor to measure here is of course speed. How quickly does it bring water to a boil?

I filled up the Backcountry Boiler to its max capacity of 16 oz (4.7 dl) and with just two handfuls of tiny twigs I picked off the ground I got the water to a boil in just over 5 minutes.

Devin gave an estimate of 4-6 minutes if you have dry fuel and 8-12 minutes with wet fuel, which sounds just about right.

Now on to the second factor, which is how much of your energy it takes to collect fuel and set up the system.

The time I had to collect twigs off the ground and get the fire going would not add more than 3 minutes to the total time.

Compare that to boiling water the regular way, i.e. over a large camp fire, and it’s clear how much more energy-efficient this method is.

Another aspect of performance is fuel, and in that area the Backcountry Boiler is very versatile. It can accept twigs, pinecones, pine needles, paper, textile, you name it. With the FireFelt accessory it also works great with “denatured” Ethyl Alcohol (Ethanol). 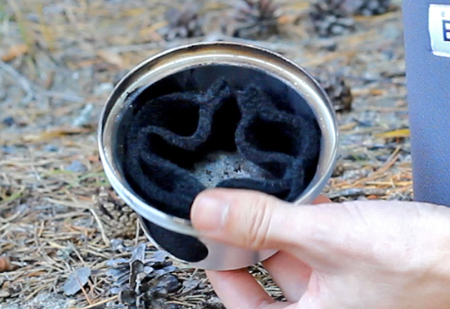 The FireFelt accessory (not included) placed inside the fire base

Another accessory that’s a nice added touch is the Pot Stand, that allow you to heat a second container on top of the chimney as seen in the below photo. 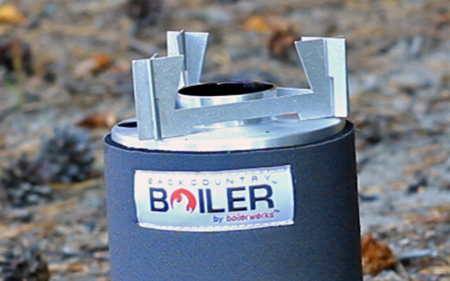 The Pot Stand could prove useful if you want to boil water for a dehydrated meal in the Backcountry Boiler but also heat water for coffee or tea at the same time. It’s a neat accessory that extends the capability of your Backcountry Boiler, but how useful it really is I’m not sure about.

The Backcountry Boiler is made up of two components, the fire base and the water container. They’re both made of very thin aluminium through a process called metal spinning, and it’s all made in the US. 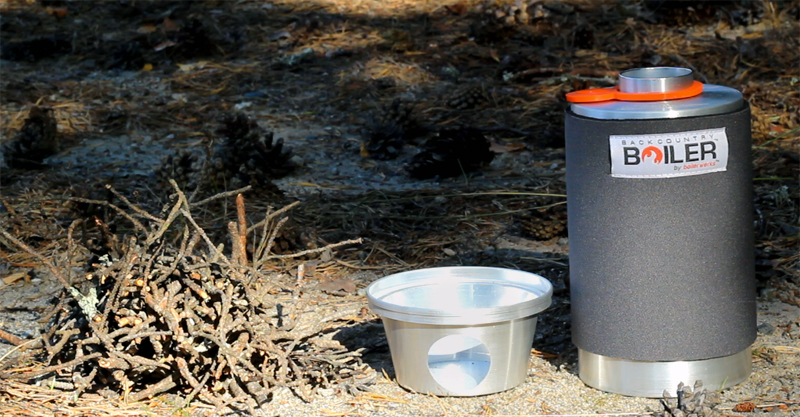 Here you can see how the firebase is made (although now it’s done by CNC machines):

The outer shell of the water container and the inner chimney are both made in the same way, and then they are sealed using a special (and secret) technique to get a tight seal.

Devin offers two versions of the Backcountry Boiler, one in standard lightweight aluminium and the other one with a hard anodized finish to make it scratch resistant.

That’s the only bad thing about it. On the other hand, it’s extremely light and weighs only 8 oz (227 g). When I got the package in the mail I honestly thought I had been scammed and been sent an empty package, that’s how light it is. As a comparison, the smallest aluminium Kelly Kettle is more than twice as heavy at 19 ounces (540 g).

You also get a convenient pouch to keep your Backcountry Boiler in, which helps keep the inside of your backpack nice and tidy. 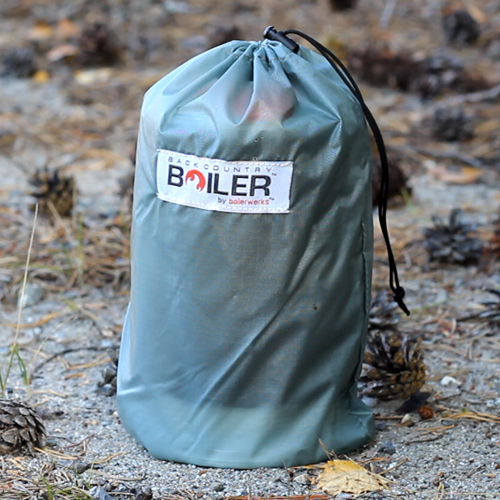 It’s ridiculously easy to use. Just grab a bunch of small twigs and light them up, put the water container on top and keep dropping twigs through the chimney to keep the fire going until the water starts boiling.

The FireFelt alcohol wick accessory that you can add to your order makes it easier to use it in wetter conditions, although it’s still possible to get a fire going with slightly damp twigs as long as they’re very thin.

Now, one important thing to note that Devin also writes in the included instruction manual is that when the water starts boiling you should remove the water container from the fire base to avoid destroying the aluminium.

As long as the water can act as a heat sink you’re fine but if you let it boil too long, or god forbid let it burn dry, then the aluminium can and probably will get completely destroyed.

There’s not much maintenance to speak of. You might want to wipe it off after use, but after the first use you’ll never get it to look as good as new again.

Just make sure it’s completely dry before you stow it away for long term storage.

Boilerwerks is the work of Devin Montgomery, who “gave birth” to the current version of the Backcountry Boiler back in June 2009.

I designed it in Google SketchUp, learned how to make its components from a PDF, a couple DVDs and Youtube, and prototyped it on a lathe on my back porch.

I just can’t help being impressed by Devin’s desire to experiment and basically learn from scratch how to manufacture the Backcountry Boiler. That’s how real innovation happens, people experimenting, testing and tweaking in their garages (or on their back porches).

He sells the product through another company of his, SparkMade, an “independent product marketplace” where you’ll find an assortment of outdoor products.

You can return the Backcountry Boiler for any or no reason within 90 days of purchase, so it’s clear that Devin really believes in his product. I do too.

All versions of the Backcountry Boiler carry a limited one-year warranty against manufacturing defects and a limited lifetime warranty against leaks. Where relevant, please include an image illustrating the problem with any claim.

Will the Backcountry Boiler last a lifetime? Probably not.

It’s not like the stainless steel Zebra Billy Can that I fully expect to be able to pass down to my grandchildren.

But the Backcountry Boiler is not designed to last for generations. It’s designed to be an ultra-light and efficient way to boil water, and that it does very well.

I never have to worry again about being able to boil water whether I’m at home during a power outage or in the outdoors where fuel is scarce. That’s a comforting feeling, and I have the Backcountry Boiler to thank for it.

Sure I could always start a regular camp fire and use any kind of container (even birch bark), but the Backcountry Boiler’s ability to bring water to a boil with pretty much any small material that burns is very convenient.

The original Backcountry Boiler cost $99 on SparkMade, and if you want to add the Pot Stand and FireFelt accessories to your order that’s an extra $21.

So this is a relatively expensive product. Definitely if you compare it to the $24.98 Zebra Billy Can, but also when compared to the smallest ‘Trekker’ Kelly Kettle that cost $64.99 at Kelly Kettle USA.

So should you buy this product?

If you value light weight and efficiency then the Backcountry Boiler might very well be for you. If you’re counting grams when you’re packing for your next hiking trip then it’s definitely for you.

However if you just want the efficiency that comes with the chimney design and don’t mind carrying around some extra weight then the ‘Trekker’ Kelly Kettle will save you a decent amount of money and should still provide roughly the same kind of performance.

And if you value longevity and don’t mind spending a lot more energy on building a regular camp fire every time you want to boil water then something like the Zebra Billy Can will save you a lot of money and also get you something that will last for a lifetime.

The coolness factor is definitely high on this one, and everyone who has seen it has been intrigued by the chimney design.

Gladly it’s not only cool though, it also works very well at boiling water quickly. So this will definitely come with me on future trips into the outdoors so I can get my steady fix of coffee and warm rehydrated meals.