We have spent a lot of time discussing the many potential benefits of 3D printing technology and every time I try to take a break from the topic, it seems something new and groundbreaking pops up that I feel compelled to share with our community.

Once again demonstrating the versatility of 3D printing, Dr. Behrokh Khoshnevis has developed a technique known as contour crafting and it could be coming to a neighborhood near you sooner than you think.

The technology was developed at the University of Southern California has a way to build large structures quickly using 3D printing technology and a fabric-infused concrete mixture to create everything from concrete bridge components on site to complete homes in 24 hours or less. 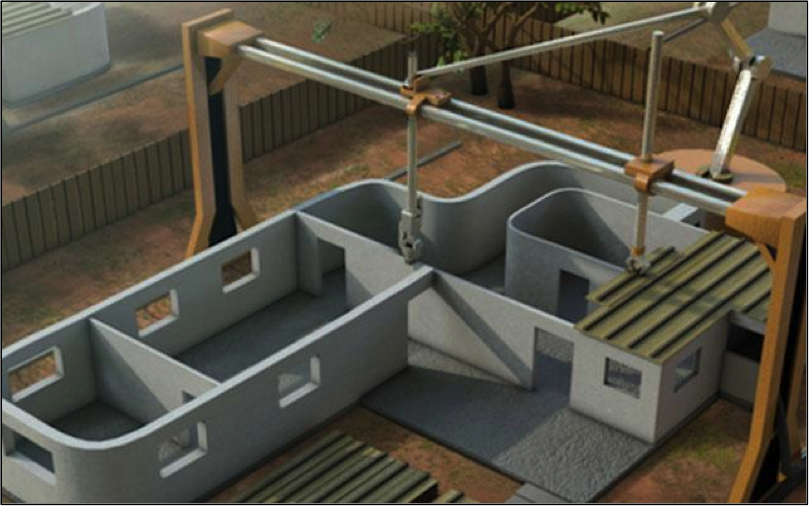 The key to this technique’s success is a special extruder nozzle created by Dr. Khoshnevis that combined with a special hardening additive, allows each layer of cement to keep its form and support the weight of each additional pass without the special molds typically used when working with concrete. The research team has concluded that a 2,000 square foot structure can be completed in approximately 20 hours using this setup. That is impressive!

The contour crafting technique has the potential to completely revolutionize the way modern structures are built while significantly reducing the costs associated with conventional construction techniques. Modern manufactured homes are still out of reach in terms of cost for many American families, but 3D printed homes could represent the market-changing product our housing market desperately needs during these tough economic times.

Some benefits provided by contour crafting include:

Yet another benefit to contour crafting is the ease with which complex curves can be reproduced. It is an architectural fact that curved structures are more resistant to natural disasters like earthquakes and tornadoes, but conventional building techniques make curved structures difficult and expensive to build. Contour crafting could become an integral component of building structures in areas prone to powerful natural phenomena.

The same technology is being used to create ceramic components such as piezoelectric actuators, but the real benefit is definitely the construction of low cost and emergency housing.

Think about a devastating catastrophic event such as Hurricane Katrina for a moment. What if a public or private entity could come into a tragedy stricken area and construct multiple solid structures per day using a series of robotic machines? Contour crafting has the potential to become one of the most significant advancements in the 3D printing space to date.

A research team at the University of Southern California is currently researching all potential uses for contour crafting ranging from constructing civil structures to buildings on the moon and Mars to fine art sculptures. 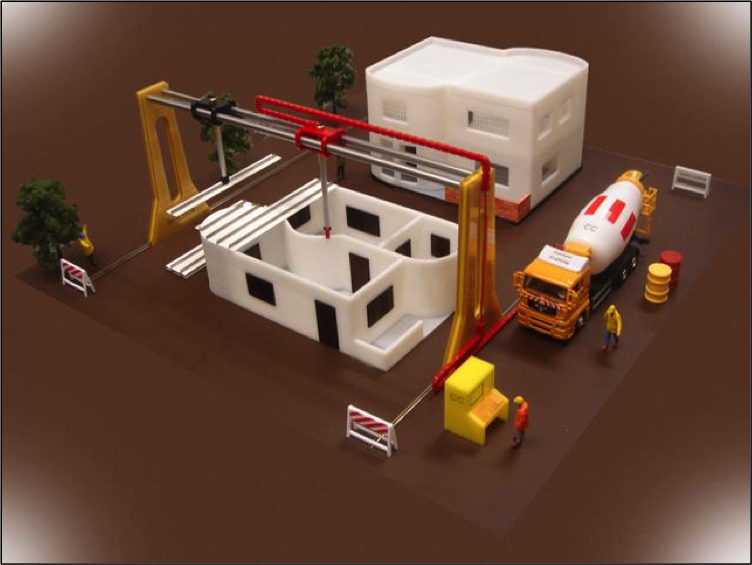 As of this writing, Dr. Khoshnevis and his team have not created an entire house yet, but the technique has been used to construct walls over 6 ft high. These walls are filled with a combination of concrete and other filler materials to create a fully-insulated wall very similar to the packed earth walls used in the construction of Earthships (refer to our December issue of Resilient Strategies for more information on this interesting idea). If you recall, Earthships rarely require an external heating source because the thick walls maintain a constant temperature throughout the year in a variety of climates.

My guess is that a 3D printed home created with contour crafting would demonstrate similar properties; yet another reason why this technology could become the “norm” for construction projects around the world.

Like so many of the 3D printing advancements we have already discussed here, exactly how this technique will look in the real world is still somewhat shrouded in mystery. The technology is here now and the mechanical components only weigh about 500 lbs, so it’s certainly feasible to assume that this technology could be in the hands of contractors in the next few years. In fact, you can see contour crafting in action by visiting contourcrafting.org to see how developed this technology has already become.

Will every American own a contour crafting 3D printer? No…but even just a handful of these units in a given geographical region could have an enormous impact on housing in the near future and I look forward to seeing how this technology plays out as a sustainable building strategy within this decade.