Last week, much of the Midwest was torn to shreds by a series of devastating tornadoes and severe thunderstorms. At least three tornadoes were classified as EF4 with winds approaching 190mph. In total, approximately 80 tornadoes were confirmed in the area. Hundreds of thousands are without power throughout Illinois, Indiana and Michigan as a result of this devastating system. 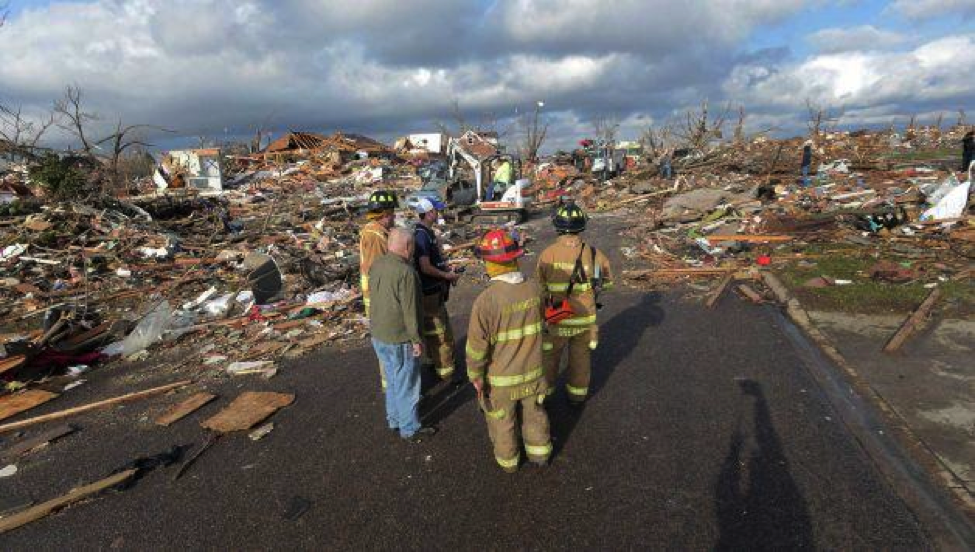 At least six people are confirmed dead in Illinois and another two in Michigan. Damage estimates are already over $1 billion.

Although these storms occurred relatively late in the season, the Midwest is no stranger to storms of this magnitude. Unfortunately, the widespread power outages and general disarray present in the stricken states is a somber reminder that our infrastructure is weakening and disaster relief efforts are still decades behind where they should be.

Another Government Failure in the Works?

FEMA arrived on scene earlier this week to begin conducting assessments of the storm-affected area. Along with it, FEMA brings bureaucracy that will once again reign supreme over the thousands of people who are literally without a home. [If you haven’t seen, there are still folks living in hotel rooms after Hurricane Sandy…and you, as taxpayers, are footing the bill.]

Many people have taken shelter in community centers including many local churches until the pieces can be put back together. Although no one knows how long that will take at this point, many of the community centers in the affected area now use backup generator systems to provide power during relief efforts.

Many of these generators were purchased last year after storms in the Midwest left 4.2 million people without power. Fortunately, it seems that some people are beginning to realize the benefits of self-sufficiency.

An Interesting Use of Technology

For many of us, it’s hard to imagine losing every possession in an instant. This is the fate of many survivors; especially in some of the hardest hit regions like Washington, Illinois. Amid all the chaos, many residents have resorted to technology to make at least some sense

of all the destruction.

The popular social media site Facebook has become a community bulletin board in the area. Not only are disaster relief updates shared among survivors, but many people have started posting pictures of items lost in the storm.

One person successfully found his paycheck (which flew 140 miles from his destroyed home) and another located some precious family photos that landed in someone’s garden a few miles away.

It’s refreshing to see Facebook used for something meaningful. Obviously, there are many other positive examples where social media has helped deliver positive change, but this is real-time interaction between survivors of a devastating event.

Are these people relying on the hope of federal disaster relief? No. Are they sitting around feeling sorry for their loss? Nope.

What they are doing is demonstrating a level of resilience we should all strive to emulate. Of course, those without power and without a backup generator would have trouble leveraging this tech-driven lost and found system, but initial reports seem to indicate that there are enough community disaster centers with alternative power generation on hand to support most of the displaced population until the grid is back online.

What Can We Learn From These Tragic Events?

There are quite a few lessons we can take away from any devastating natural event like this. For instance, backup generators have become a crutch for survivors of these storms and many people are better prepared after facing similar circumstances earlier this year and last summer. [We have a special report on how to create your own power here.]

These events also demonstrate that Facebook can be more than a platform to share your weekend plans with friends. Although many of us already use Facebook as a way to spread resiliency throughout the community, there are many people who never saw social media as anything more than a toy until the community used it to aid in the rebuilding process.

Most importantly, early cleanup efforts show that people in the Midwest are not sitting idly and waiting for government intervention. Similar events in the area have shown that FEMA is not equipped to handle a disaster of this scale effectively – if they decide to help at all. As a result, there is a noticeable change in the perception of survivors. They are already starting to rebuild and have chosen not to wait around for FEMA and other bureaucratic organizations that are expected to fail as usual.

Finally, we need to remember that some areas of this country present a considerably higher risk for natural disasters. We are well-served to remember that maintaining multiple levels of redundancy is especially important in these areas. Backup power, food reserves and other self-sufficient activities are paying off in a big way for those in the Midwest who have taken the time to assess their risk and make changes to their lifestyle based on the this risk assessment.

Our thoughts go out to the victims of this storm system. We wish the region a speedy recovery and (hopefully) a transition into a more resilient lifestyle during the rebuilding process.