Home Energy Solar for the Rest of Us

As we continue to grow our online community, sometimes it’s worthwhile to revisit old ideas. Not because there’s nothing else to talk about, but so some of our new readers can get up to speed.

One of these topics is solar energy. Think about it: You visit our site, read about all this high-tech gadgetry that allows us to thrive in nearly any circumstance but realize it isn’t within reach for you.

Do you leave the site in search of more attainable ideas? Maybe – which is why it’s important to point out that other options do exist. These options – in addition to making us more resilient – save us money which can be used for other sustainability projects around the home.

After all, not everyone has a large roof area facing in a southern direction or a large enough piece of land to set up an array stand in the yard. Even for those of us who do, it can be difficult to break into solar because of the still somewhat high initial investment required.

Those of us living in urban areas face a similar problem because the rooftops are usually not owned by the tenant meaning solar systems cannot be installed.

Does this mean we should forgo alternative energy? I don’t think so. While not a new idea, community solar gardens are gaining popularity across the country and offer an alternative energy solution for those of us unable to install solar panels at home for whatever reason.

How Does it Work?

The basic idea of a community solar garden is that customers buy into a solar array constructed in an ideal location. For their investment, customers receive credit on their electricity bill based on the power produced by the panels they have purchased.

Whether customers want to reduce their carbon footprint, save money or both, investing in a community solar garden is a great way to take advantage of the solar boom regardless of where they live. 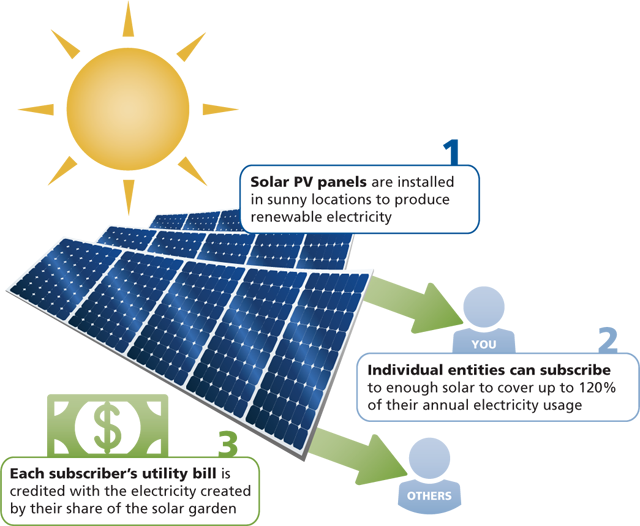 These initiatives also benefit solar developers by opening up an entirely new market. Approximately 85% of all residential customers in the US cannot own or lease solar systems because the location is unsuitable or the roof is not controlled by the customer (i.e. renters and people living in large apartment buildings).

Developers build solar farms ranging in size from a few panels on a rooftop to thousands of panels on a large parcel of land. Once completed, the developers sell the energy output of a certain number of panels to each customer. Usually, the customer chooses how many panels to purchase based on electricity usage and budget.

Typical costs per panel are anywhere from $500 to $1,400. This cost can be offset relatively quickly as conventional energy prices continue to rise. The other advantage to these solar gardens is that the panels are positioned for optimum performance.

Where I live, for instance, my roof does face south and I plan on installing panels within the next year. Unfortunately, large pine trees will block the sun for a few hours each day forcing me to trim the trees for maximum panel efficiency or deal with periods of low output throughout the day.

Solar gardens get sun exposure throughout the day and I would venture to say that they produce electricity more consistently than most home solar installations.

It’s worth noting that this concept is still in its infancy. According to a report by the New York Times, there are only about 52 of these projects occurring in 17 states right now although quite a few other states have legislation on the table that would make community solar gardens possible in many other areas.

Since the technology is so new, there is a chance you could spend significantly more as an early adopter than you might in five years. With the speed at which solar technology is advancing, however, I don’t think it will take that long for solar gardens to make financial sense for most people.