Home Food 6 Delicious Things You Can Do With Birch Sap

Birch has played an important role for self-reliant folks throughout the millennia. The birch bark once acted as an important roofing material, and was also used to make waterproof but lightweight canoes, bowls, shelters, baskets, and more. The birch tree also gave firewood, twigs to make brooms, tar (or “Russian oil” to use as a glue, leaves and buds used in folk medicine, and last but not least it provides an abundant supply of birch sap every spring.

Birch sap has traditionally been a source of nutrients in the spring in the boreal and hemiboreal regions of the northern hemisphere. The famous Arab traveller Ahmad ibn Fadlān observed as early as 921 that the Turkish-speaking Bolgars along the Volga River drank fermented birch sap.

A deficiency of food in early spring, in the so called “hunger gap”, was customary in northern Europe until the end of the 19th century so the extra nutrients and sweet taste of sap was a welcome change after a long winter. And in places where water-springs were rare, tree sap was the only drink for herdsmen.

“During the last real famine in Sweden, in 1867, tree-sap was widely used in the southernmost part of Sweden, for bread, gruel and as a mealtime drink. Birch was therefore referred to as the “poor-man's cow”, according to one record from southern Sweden.” (Uses of tree saps in northern and eastern parts of Europe, p. 345)

Birch sap is collected only at the break of winter and spring when the sap moves intensively, just after the frost has crept out of the ground and before the tree has developed green leaves. In eastern Europe March is called “the month of sap” or “the month of birches”, but in more northern latitudes April is the best time to gather birch sap.

Basically you drill a hole at angle upwards into the tree. I’ve seen recommendations for a hole between 1-2 cm in diameter and 2-6 cm into the tree depending on the thickness of the tree. You can expect to get 5-10 liters of sap per tree per day.

Tapping a tree does not harm the health of the tree, just make sure you plug the hole when you’re done and don’t drill too many holes in the same tree.

Another less invasive way to tap birch sap is to cut the end of a branch where it’s around 1 cm in diameter. This can still yield up to 1 1/2 litres of sap in a day, and when you’re done you can seal the wound with wax or birch tar. 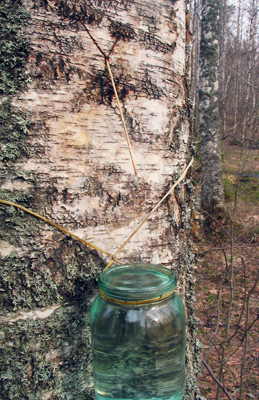 Birch sap is commonly known for its detoxifying, diuretic, cleansing and purifying properties, and can be drinken fresh straight out of the tree.

Cartographer Olaus Magnus mentioned briefly in 1555 that Scandinavians were tapping birch for sap and using it as a fresh drink.

The taste is actually not bad. It tastes like water with a hint of sweetness and birch. But I’ll have to admit, drinking large quantities of birch sap is not my cup of tea.

After a few days the sap will naturally ferment and the taste will become more acidic, but can still be consumed. It’s highly perishable though, and can be preserved for longer periods by freezing, adding sugar or citric acid, or pasteurising it.

Birch sap contains, among other things, 17 amino acids, as well as minerals, enzymes, proteins, antioxidants, sugar (xylitol, fructose and glucose) and vitamins (C and B). 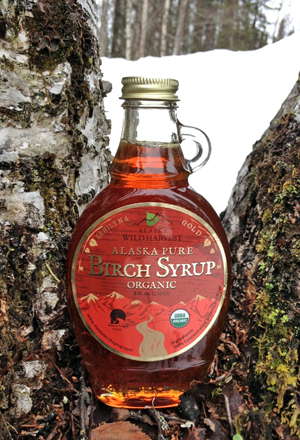 Kahiltna Gold Birch Syrup from Alaska. You can buy it here.

Birch syrup is produced in the same way as maple syrup; you reduce the water content to concentrate the sugar content. But birch syrup is much more expensive, up to five times the price, because you get less syrup from birch sap.

There’s roughly half as much sugar in birch sap as in maple sap, so compared to maple syrup you need twice as much sap to produce the same amount of syrup.

Depending on the species of birch, location, weather, and season the birch sap will have about a 0.5-2% sugar content. You need about 100-150 liters of sap to produce one liter of syrup.

In commercial production they use reverse osmosis machines and evaporators to get rid of the water. For example in Alaska total production of birch syrup in Alaska is approximately 3,800 liters (1,000 U.S. gallons) per year.

When I’ve made birch syrup though I’ve just carefully boiled the sap. It’s easy to burn the sap though because of the high fructose content, and it takes a long time to get rid of all that water. What you can do to reduce the risk of burning the sap is to first boil off something like 50% of the water and then move it over to a bain-marie / double boiler and get rid of the rest of the water.

Birch syrup is delicious on pancakes, and it’s a fun experiment.

Birch sap wine goes back several hundreds (if not thousands) of years. It’s not harder to make than adding yeast and maybe som sugar to the birch sap and then letting it turn into wine.

The following recipe of birch sap wine is from 1676:

To every Gallon whereof, add a pound of refined Sugar, and boil it about a quarter or half an hour; then set it to cool, and add a very little Yeast to it, and it will ferment, and thereby purge itself from that little dross the Liquor and Sugar can yield: then put it in a Barrel, and add thereto a small proportion of Cinnamon and Mace bruised, about half an ounce of both to ten Gallons; then stop it very close, and about a month after bottle it; and in a few days you will have a most delicate brisk Wine of a flavor like unto Rhenish. Its Spirits are so volatile, that they are apt to break the Bottles, unless placed in a Refrigeratory, and when poured out, it gives a white head in the Glass. This Liquor is not of long duration, unless preserved very cool. Ale brewed of this Juice or Sap, is esteem'd very wholesome. (Vinetum Britannicum, p. 176, London, England 1676.)

Here’s another more modern recipe and some other reflections on making birch sap wine.

Birch beer in its most common form in North America is a carbonated soft drink made from herbal extracts, usually from birch bark, although in the colonial era birch beer was made with herbal extracts of oak bark. It has a taste similar to root beer. There are dozens of brands of birch beer available(check out this taste test).

After the sap is collected, it is distilled to make birch oil. The oil is added to the carbonated drink to give it the distinctive flavor, reminiscent of teaberry

Alcoholic birch beer, in which the birch sap is fermented rather than reduced to an oil, has been known from at least the seventeenth century and was common in northern Europe.

In Sweden birch sap has been used to make ale by mixing it with malt and yeast. A 1749 description from Småland, Sweden, says that the birch sap ale was sometimes flavoured with bog myrtle (Myrica gale L.).

In south-western Finland a kind of ale was made of birch sap mixed with flour and malt.

You usually make mead from water, honey and yeast. To make birch sap mead, just switch the water for birch sap. I haven’t tried birch sap mead, but I’d guess that it adds a hint of birch taste to the mead, as well as some nutrition.

All over Europe birch sap has been used to make vinegar. Vinegar comes from the French word vinaigre and means “sour wine.” There are records of birch sap vinegar being made in Sweden, Estonia, Belarus, Hungary and more. I haven’t been able to track down a birch sap vinegar recipe, but you should be able to use this one from Mother Earth News and use birch sap wine as the alcoholic ingredient.

Use of birch sap

Uses of tree saps in northern and eastern parts of Europe