As the average age of farmers across the country continues to increase, I wonder what will happen as these business owners reach retirement. Based on current age statistics, we will see significant changes in the agricultural landscape within the next 20 years and at this point,

I’m not sure anyone knows exactly what that new landscape looks like.

One thing is certain…we need a new generation of farmers to carry the torch into the next 20 or 30 years. This is especially true given the widely-anticipated global food shortages expected to take hold as our global population reaches 9 billion and beyond.

Let’s take a look at some of the current statistics I found online.

In fact, only 360 new farmers in the 25-34 age group were reported in the latest USDA census and there was a net loss of -282 farmers in the Under 25 category. The only group with significantly increased numbers was the 65-74 year old age group. No disrespect to our older famers, but how much longer can we expect these people to produce food?

Certainly not into 2050 when the global population eclipses 9 billion and probably not even in 2030 when the population is expected to exceed 8 billion.

Not to mention the rapid development in countries like China and India which is guaranteed to tax our existing food infrastructure as more people enter the middle class and begin consuming goods like we have been doing for years in this country.

Since I’m not really a numbers person, I’ll make this simple. Right now, older farmers outnumber the new generation of farmers by 6 to 1. Obviously, this is a problem that needs to be addressed – and quickly. 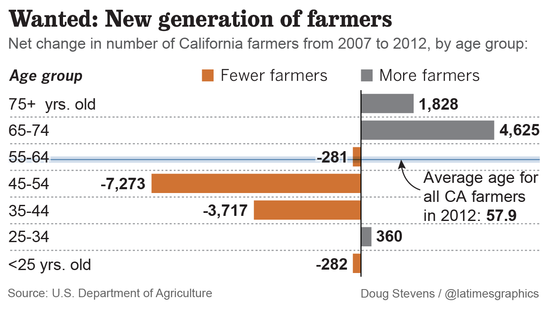 The statistics I found were exclusive to California, but I think the USDA census results offer a glimpse of things to come nationwide if things don’t change for the better.

Is There Any Hope?

Despite these startling figures, I think there is definitely room to improve. In some cases, improvements are already being made.

The fact that our own community of resilient-minded individuals continues to grow is a testament to the progress we have made as a society in terms of food production and other sustainability initiatives.

And despite the apparent absence of a new generation of farmers, they are out there and have had success working to carve out a niche market catering to increased consumer demand for organically grown, local produce.

Whether it’s a small-scale commercial farm or just people bringing excess produce to local farmer’s markets, I truly believe that there is light at the end of this seemingly bleak tunnel as we push forward and face socio-economic challenges never before endured by the human race.

The price of farmland has skyrocketed in recent years. This makes it difficult for a young farmer to get started without large amounts of capital. Farm equipment is also expensive. And to make matters worse for aspiring farmers, banks don’t see the profit potential in most farming operations making it difficult – if not impossible – for young people to secure loans for new farms.

Fortunately, many young farmers determined to get started have found that leasing farmland is a much more cost-effective alternative to purchasing land outright (at least initially). Farm equipment can often be rented or borrowed from neighboring farms to keep costs low until the farm starts generating profits.

How can we support these young, struggling farmers? My first inclination is buying shares in a CSA. By purchasing a share, the farm receives a guaranteed payment upfront – allowing them to purchase necessary equipment and supplies they might struggle to obtain otherwise. The guaranteed payment model of the CSA also gives young farmers the confidence to try new things and paves the way for future innovations. 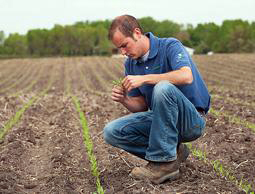 If you get anything from this article, I hope you realize that we absolutely depend on the next generation of farmers. We must help to foster the entrepreneurial spirit of these individuals to ensure a future for our children and grandchildren.

For years, agriculture has relied on the availability of cheap fossil fuels and fertilizers, but that model is changing. More and more consumers are demanding local organic foods and it is up to an entirely new generation of farmers to make that happen – even if it is an uphill battle getting started.