But another politician from California is interested in finding another way…

Last week, California Assemblyman Mike Gatto proposed a new way to draft legislation that takes cues from the crowdsourcing phenomenon we have covered many times before. Could this become an effective voice of the people, or is it simply another government deception?

Let’s take a closer look at this interesting idea to see if it’s something that actually could work.

Assemblyman Gatto wants to use a wiki platform that can be edited by constituents until a final draft is created that makes sense to everyone involved. This is very similar to the Wikipedia format where users can submit new articles or edit existing content for accuracy.

Crowdsourcing relies on shared public wisdom to create truly meaningful legislative actions that could have a significant impact on both daily life and the political machine.

By putting the brainstorming, drafting and editing in the hands of the public, we could see some meaningful legislation come from this forward thinking initiative and maybe some legislative process reform if we’re lucky. 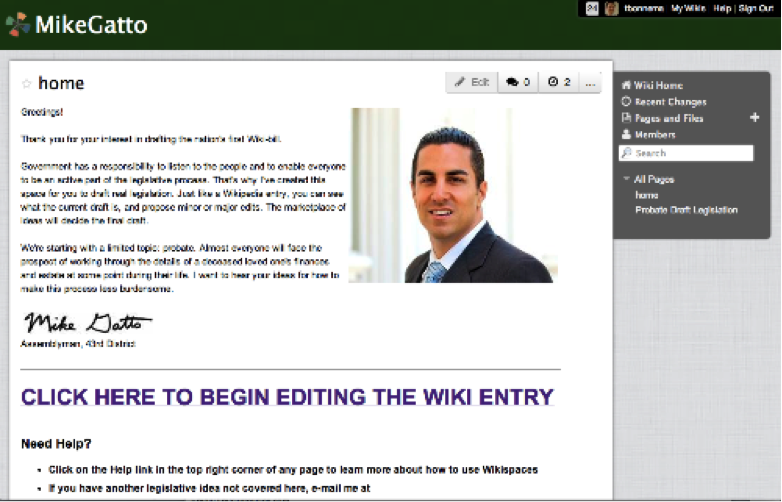 Crowdsourcing has worked very well as a fundraising platform thanks to services like Kickstarter, Indiegogo and Crowdfunder. I think it can work well for politics as well, but there are a couple of concerns that will need to be addressed before this idea can really take off.

First, Wikipedia uses a system of moderators that approve (or disapprove) all changes before they go live on the Web. In the system proposed by Assemblyman Gatto it is unclear who would be responsible for moderating proposed changes. Will these people be selected by political interest groups or will regular citizens have a voice?

Government pork will ultimately get stuffed in the bill either way. How can we be sure that the voices of participants are actually being heard? Some sort of transparency would have to be present for this solution to meet the trust concerns normally harbored by the general public when it comes to practically any government involvement.

Also, who decides which bills go into open discussion and which bills are created in the traditional manner? Assemblyman Gatto’s proposal revolves around reforming probate law.

Although this is an issue all of us face at some point in our lives, why not start with solar energy initiatives? Is it because there is too much invested interest in Big Oil to give the people a true voice when it comes down to important issues? At this point, we have no way of knowing how these questions will be answered; however, if Gatto is successful, this could spark change throughout the entire political system.

Overall, I really like the idea because it could speed up the painfully slow legislative process while giving people a real voice in the community. It will be interesting to see how this probate bill turns out (the deadline for submitting new legislation is February 21st). If successful, this could represent the next step toward reclaiming the democracy our country was built upon – not the shadow of a once great system we are currently forced to endure.

The key to this plan’s success is making sure special interest groups do not get involved (isn’t it inevitable though?) and holding the politicians themselves accountable for transparency throughout the legislative process.

The chances of this plan succeeding the way Gatto has envisioned is slim. That said, any success this bill experiences could easily translate into real change in the near future. The fact that government is at least acknowledging some of the deficiencies of current legislative processes is a step in the right direction…and hopefully more is on the way in 2014.