Home Food “Frankenfish” May Be Coming to a Market Near You

Most of us are familiar with the term genetically modified organism (GMO) and how genetically modified crops such as corn and soybeans have practically taken over farms around the world. While the jury is still out on the exact health implications of GMO crops, I choose not to feed my family GMO products whenever possible because GMO goes hand-in-hand with pesticide/herbicide contamination.

But…after nearly two decades of research, it seems that the Food & Drug Administration may be on the verge of making a decision about a new GMO threat – animal protein.

We all knew this would happen eventually. Companies have been researching and developing genetically modified animals for years and here we are…faced with a decision about whether or not we should consume manmade creatures designed for quick growth.

AquaBounty Technologies is a Massachusetts-based biotech company heavily invested in the GMO animal protein market. A new product, known officially as AquAdvantage salmon, is currently waiting for FDA approval and a decision is expected very soon. 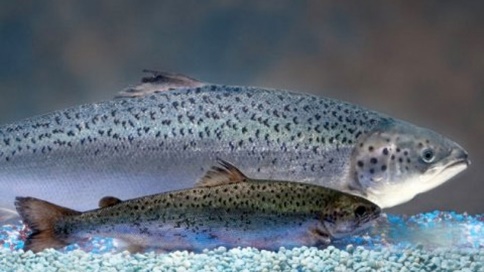 The fish in the back is an AquAdvantage salmon. The much smaller fish in the foreground is a conventional Atlantic salmon.

This could mean these “frankenfish” (as referred to by critics) could be in local grocery stores sometime in the next few months. In my opinion, this is a scary thought to say the least.

Like most other commercial endeavors, the creation of GMO salmon is based on profit. These fish have been specifically designed to reach market size in about half the time of conventional farmed salmon which represents a significant cost savings for fish farms and consumers alike.

AquaBounty claims that these salmon are safe to eat, environmentally friendly and have the potential to feed more of the population while consuming less resources.

Other benefits include a fresher product due to reduced travel distance, a lower carbon footprint and overall sustainability in a world that will face severe food shortages in coming years as the population continues to explode.

But…is it worth it? If approved by the FDA, AquAdvantage salmon would be the first genetically engineered animal approved for human consumption. I don’t know about you, but it sounds like the start of a bad science fiction movie to me.

Of course, this has been a very controversial issue already despite the fact that the FDA hasn’t actually approved the product yet. Environmentalists, consumer watchdog groups and the Alaskan fishing industry all have reservations about this product and what the potential implications could be for the fishing industry as a whole.

That said, numerous grocery chains have already publically declared their refusal to sell these GMO salmon regardless of the pending FDA decision. Just last week, Kroger and Safeway (two of the largest supermarket chains in the country) joined the growing list of retailers that are simply not interested in selling these products. Other retailers refusing to sell AquAdvantage products include Whole Foods, Trader Joe’s and Target. Some large grocery retailers, including Wal-Mart, have yet to comment on whether or not these products will be sold in stores.

Are GMO Animals the Future?

At this point, it’s difficult to forecast the future of GMO animal protein. On one hand, a fish that reaches maturity in half the time is a great idea. Even our home aquaponics setups could benefit from the rapid growth of these animals.

On the other hand, of course, is the question about the long-term effects that these salmon could have on our health and the health of the global ecosystem. AquAdvantage salmon are created by splicing the growth gene of the related Chinook salmon with a promoter gene found in an eel-like species known as ocean pout. Oh, by the way, researchers have also engineered the fish to all be sterile females – ummm…anybody remember Jurassic Park and how “well” that worked out in the movie?

The bigger issue is what an approval decision from the FDA could mean for the future of our food. We have long supported the adoption of supply chain transparency when it comes to our food and if AquAdvantage is approved, all of that could crumble as biotech companies race to create an entourage of genetically modified animals.

First it is fish, then cows, chickens and on and on. 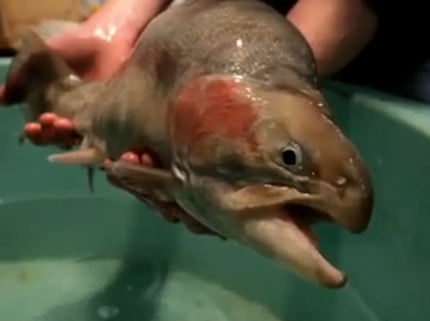 And what about the long-term effects on natural animal populations? It seems that there are more questions than answers at this point, but consumer demand usually trumps all in the food industry and there are millions of people vehemently opposing the approval of these frankenfish.

Combined with the outright refusal of many grocery retailers to carry these products, my hope is that this GMO trend dies before it gets off the ground.

It is my opinion that these fish represent an abomination against nature and the possibility of far-reaching consequences to the ecosystem exist that we are not capable of understanding at this time.