Think about a farm being run without human intervention. Robots move to and fro – never tiring or complaining about wages – while farmers achieve production levels they never imagined possible.

Believe it or not, it’s already happening.

We have discussed the role that drones may play in the agricultural industry in the future. Their ability to fly over large expanses of land quickly while analyzing the moisture content of the soil accurately could prove to be one of the biggest advancements in farming in the last hundred years.

Experts agree that it won’t be long before robot tractors cruise the landscape, automatically adjusting seed mixes depending on the exact location. Drought-resistant seeds might be sowed in one area while normal seeds can be placed in areas that have enough water. Targeted use of pesticides and herbicides is also on the horizon as these automated farm hands become more advanced.

Although these images might stir up thoughts of a futuristic society more likely to be found in a late-night sci-fi special, robots have already made a significant impact on farming operations in the United States.

Not far from where I grew up in Upstate New York, a large dairy farm has been operated by the same family for seven generations.  Since 1837, the Borden Dairy Farm has held tightly to sustainable farming practices that have seen the farm through some of the worst economic conditions in history…a time when many neighboring farms were forced to shut their doors permanently.

Thanks to robotic technology, the Borden’s have achieved a level of efficiency not possible using conventional farm hands for labor.

Three or four times each day, cows wander to an area of the barn where they can be milked automatically by a specially-designed robot. The cows aren’t forced into the milking area – they enjoy munching on grains while being milked.

A collar complete with a digital chip identifies each animal so the machine knows exactly where to latch on to a specific cow. This process has traditionally been done by hand and difficult economic times have made finding reliable labor difficult, not to mention expensive. Adding these robotic milking machines is a confident investment in the future and the Borden’s are already benefiting from the increased efficiency of this technology.

But why stop there? The Borden’s have also installed two other robots. One is designed to move up and down the center aisle of the barn pushing feed toward the cows at predetermined intervals and the other moves manure out of the stalls. To say that this dairy farm is well on its way to complete autonomy is an understatement. In many respects, they are already there. 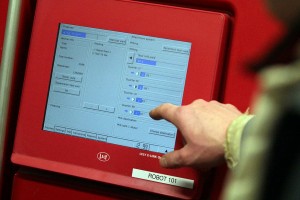 While this technology is still relatively expensive and hasn’t quite caught on as a mainstream farming technique just yet, the success of this family-owned farm in the Northeast proves the concept of robotic farming in a big way. I think this is definitely an area where the early adopters will be rewarded in short order as they hold a competitive advantage over other farms already.

The future of robotic farming is imminent. In just a few short years the global population will break 10 billion and many experts are already forecasting severe food shortages as the population grows beyond current food production technology.

The ability to have a tireless robotic staff working around the clock to produce high-quality, sustainable food sources is exactly what we need to mitigate future food shortages. Certainly, this is a better option than GMO animal protein and some of the other outright scary ideas coming to market right now.

While I think widespread adoption of robotic farming is still a few years away, it’s refreshing to see farmers investing in new technology. These pioneers are willing to break the mold in an attempt to create resilient agricultural solutions that leverage technology whenever possible.

My hope is that this technology makes it into the residential space eventually. What I wouldn’t give to have a robot watering and weeding my garden when it’s 100°F outside!

As home automation technology becomes more popular, I don’t see automated home agriculture solutions being far behind. We already have smart irrigation systems and little robot vacuums cruising the carpets, so why not a little garden robot that can keep a tab on things when we can’t?