Home Food How to Hedge Your Retirement Against Financial Collapse

On a planet with an inherently unstable and fragile financial system, where governments around the world are slashing pensions and central banks are inflating away our purchasing power, what’s the best way to save for old age?

Ask a financial advisor and you might still get the advice to save and invest 10% of your income every month for a lifetime and live on the passive income when you retire.

The problem with that, and this is something nobody will tell you, is that these investments may be worth next to nothing by the time they retire.

Then there’s those that advocate you put all your money in physical gold and silver as a hedge against the inflation, or loss of purchasing power, that central bankers create when they conjure trillions of dollars out of thin air.

The reality though is that there’s all of these people who are nearing retirement age without having saved a penny other than what’s in their public pension fund. And in most cases, that money is locked into the financial system.

And we’ve seen, most recently in Greece, what can happen when you entrust your entire financial future in the hands of politicians and bankers.

As greek retiree Ilias Mathes says in a recent AP story, “Of course I’m upset. The government has swindled our pension funds.”

It’s the circle of life, and it’s been going on for millennia. First politicians / emperors / kings / gangsters / thugs steal your money in return for “protecting” you, then they squander it, and then they come back and make you pay for their mistakes.

And now the people of Greece are feeling the consequences of giving up their personal power. With pensions slashed and strict capital controls put in place, some pensioners in Ilias Mathes’ village of Karitaina have to pay 40 euros in taxi fares to get to and from the nearest banks just to withdraw 60 euros, the maximum daily amount for those with bank cards. I’m sure you agree that’s a situation you’d want to avoid at all cost.

So what can you do to take back control over your retirement? Here’s some lessons learned from history:

Learn from Ilias Mathes. His protection against bank closures, capital controls and the slashing of his pension: 10 goats, some hens and a vegetable patch.

“I have my lettuce, my onions, I have my hens, my birds, I will manage,” he said, even though he can no longer access his full pension payment because of government controls imposed six days ago. “We will manage for a period of time, I don’t know, two months, maybe three months, because I also want to give to our relatives. If they are suffering, I cannot leave them like this, isn’t that so?”

As the AP story says, “the production of food and milk gives villagers in many parts of Greece a small measure of confidence — and a valuable buffer.”

My best advice to you, regardless of if you’re 20 or 70, is to become a producer instead of being only a consumer.

Because when you’re just a consumer of food, you’re highly dependent on the financial system and its means of exchange; money. But when you can produce some or all of your own food, you don’t need as much money or a steady job to put food on the table for your family. You just need decent soil, sunshine, water, and some patience. 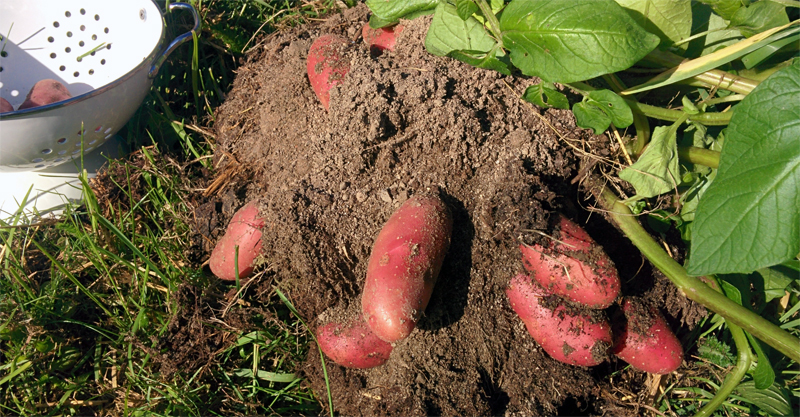 But when politicians implement capital controls it’s too late. At that point you no longer have any control over what they or your bank decide to do with the money you have in your bank account. You’re at the mercy of bureaucrats.

But you do have control over your backyard, and the resources you invest in your garden can’t be controlled or confiscated as easily. And a productive garden can make quite a difference regardless of if you’re temporarily (or permanently) out of work or barely getting by on your retirement payment.

With the real possibility of capital controls spreading to other countries than Greece, including my own, I’d choose potatoes in the ground over money in the bank any day.

So plant a garden. Catch rainwater from your roof. Get some chickens. Plant as many fruit and nut trees as you can comfortably fit on your land. Set up these natural production systems now while there’s time so that you can reap the rewards later. Regardless of if things get tough or even if they don’t.

But what if you don’t have any land? That’s the next lesson. Get some.

Lesson #2: The Village Beats The City

When times get tough a tightly knit community of neighbors, who genuinely care about each other, wins out over thousands of strangers crowded together in the tall cement jungles of the city.

In the village it’s easier to live,” said Ionnis Psilas, who is saddled with debts he says he can never repay after the failure of his car import business. “You can get products from neighbors and give them some. In Athens you are strangers.

So rather than buying an apartment in the city when you retire, my advice is to buy a property that you can actually turn into an asset.

That’s what I did last year when I moved out into the countryside, where I’m now the owner of a few acres of fertile land, a modest-sized log house, four small log cabins, a big barn, and a garage.

What I find crazy about the society I’m living in is that if I had spent the same amount of money in the city just 20 minutes away I might have gotten a small 2 bedroom apartment, at most. And I’d still have to pay rent every month!

Now, I can’t say for sure that I’ll live on this land until I die, but I can just imagine the kind of abundance I can create here in the next ~40 years leading up to my supposed retirement age.

Not that I think I’ll ever see a penny from the government. What we see in Greece today is coming for all of us, because the same faulty financial system is underpinning every single “developed” country in the world. It might not happen everywhere at once, but it’s going to happen.

This financial system has put us all deep in debt, and some day this debt will have to be paid.

But I’m not afraid, because I’m taking back control over my life. I realize the personal power each and every one of us possess. To quote Martin Luther King from his last recorded speech the evening before his untimely death:

“And so I’m happy, tonight. I’m not worried about anything. I’m not fearing any man! Mine eyes have seen the glory of the coming of the Lord!”